Which is the best critical illness policy in India?

Do you know that, as per Indian health statistics, every year 3 % of the population go below the poverty line due to the heavy spending on illnesses?

It means, because of large financial outgo for treatments, every year 3% of the population, drop down to one level below their present class i.e. high-class people become middle and middle transforms to lower class. So, Imagine how badly our financial life may get affected if we do not have a proper source of funding at the time of facing non-curable diseases.

The probability of getting affected by life-threatening diseases are getting higher day by day.

As per the growing modern trend in our society, our lifestyle has changed in a bit good way but a lot in a bad way (eating junk/overeating & drinking). There is a rapid rise in obesity in India, which leads to diabetes, stroke and many heart diseases.

As per the statistics on Indian health –

Along with bad lifestyle, pollution is also affecting our health. 7% of death in India is due to respiratory diseases. Before any of this life-threatening disease happens to us. We should be prepared financially so that we can utilize our energy fully on the treatment and not on the financial burden of that time. So, to meet those uncertain financial needs, having a critical illness policy cover will be the best resort.

If you are in a hurry so just watch the video below to get a brief idea.

What is critical illness cover?

Critical Illness insurance is an insurance product in which the insurer (insurance company) is promising to make a lump sum cash payment if the policyholder is diagnosed with one of the specific life-threatening illnesses on a predetermined list as part of an insurance policy. The policy may also be structured to pay out regular income and the payout may also be on the policyholder undergoing a surgical procedure, for example, having a heart bypass operation, etc. 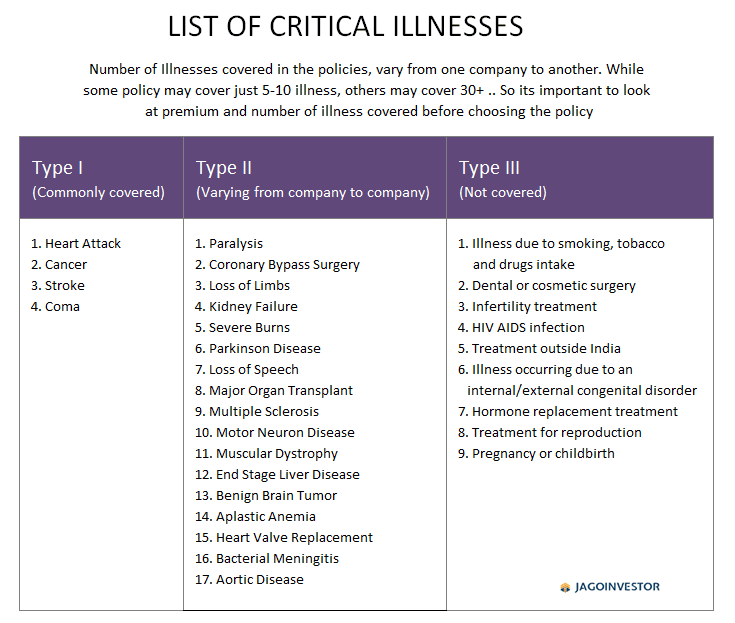 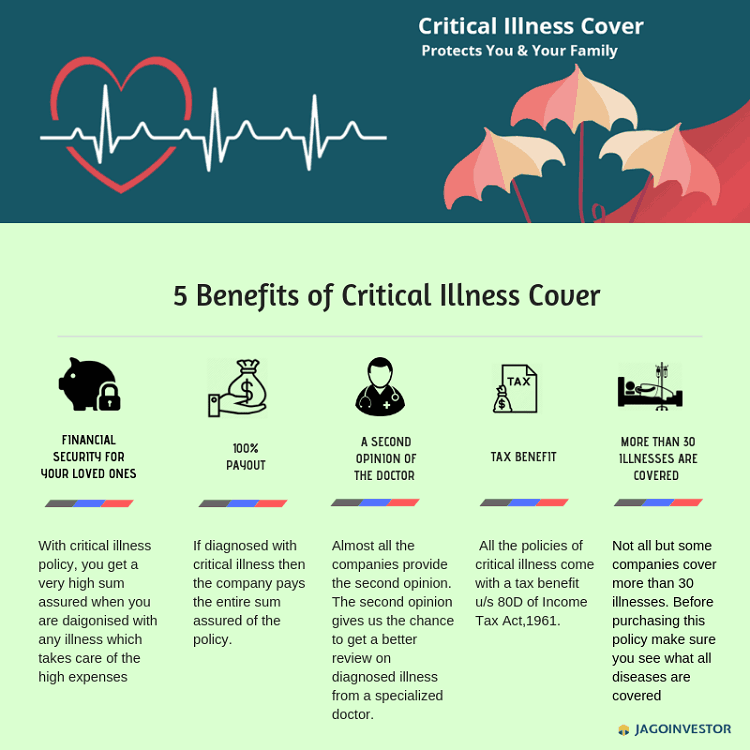 ****** The premium details are for a 1-year policy including GST. 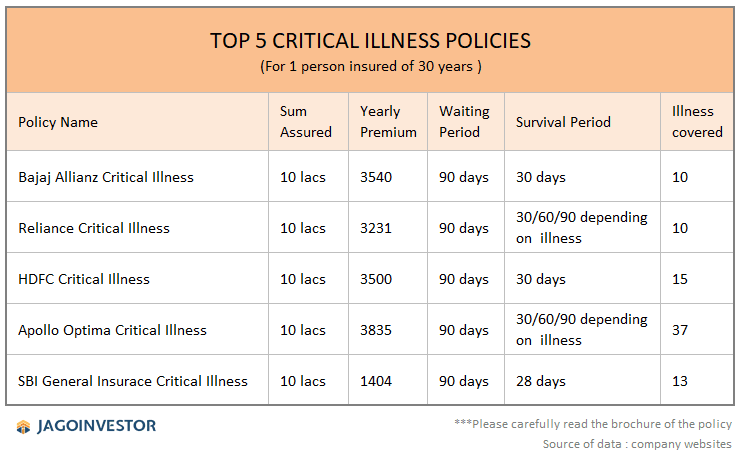 Comparing premium amount is as simple as, selecting a critical illness policy of that company which gives the best value for money at the same sum assured and illnesses cover you are looking for.

Getting the highest sum assured should not be a criterion for policy buying. The standard cover suggested is of 10 lacs to 20 lacs, so that your financial life should not get affected due to any uncertain illness.

A waiting period is a period up til which any of the illnesses specified under the policy are not covered.  For example, if it’s 2 months, then if any of the critical illness happens to you before 2 months, your claim will not be taken. The insurance companies will consider your claim for paying the sum assured only after the period of waiting has ceased after buying a critical illness policy. So, before buying policy make sure that policy is having lesser waiting period. Almost all the companies have a waiting period of 90 days (not including existing illnesses).

The survival period is the length of time, for which the insured must survive after being diagnosed with the illness,  in order to get a claim. The insurance cover will be paid only after the survival period has passed. So, if a person’s death happens immediately after a heart attack, even if he has critical illness insurance, his or her family may not receive any payout from the insurer.

The length of survival period varies among different insurers, it can be 14 days or 30 days, etc. So,  for buying a critical illness policy make sure that the policy has the least survival period.

The logic behind the survival period clause is that, critical illness insurance benefits are meant to be used by the insured as a living benefit to recover from illness, not a Death benefit. So, from this it is very clear that you should have a term insurance(life insurance) to provide the cover to your family, even if already having a critical illness cover.

On selecting the best critical illness policy do not look for the maximum number of illnesses, it will be very illogical and will also lead you to pay a higher premium. Instead, go for a standard set of illnesses ( i.e. 28-32 illnesses covering major 4 critical illnesses) that might happen due to your life style habits and hereditary.

Why have a Critical Illness Cover if I already have Health Insurance?

One last thing to keep in mind is that health insurance and critical illness are two different products. Critical illness typically covers you from specified illnesses and not regular health-related issues.

Below given table briefly represents the difference between health insurance and critical illness plans,

Let us know your views and queries about this article in the comment section.

36 replies on this article “Which is the best critical illness policy in India?”