From successful CA to Entrepreneur – Real life Journey of Umesh

Here is the real-life story of Umesh, who is one of our long time readers. He agreed to share his life story on how he turned from a successful CA to an Entrepreneur. I am sure it will be an inspiring read for other readers and we all can take some learning’s from his story.

I have been a follower of Jagoinvestor.com for the last few weeks. One post from Manish regarding how he quit his job with Yahoo was catchy and I responded back to him stating that I was happy for him as his story pushed me down the not so distant memory lane of my pursuit to being self-employed.

He has been kind enough to let me share the same with you readers and I hope I can add some value to the time that you will spend in reading the same.

And here it goes

I am a CA with over 25 years of experience. As a child, I had been brought up in the company of CA’s and when I had ceased to be an infant, my father – who is also a CA – joined Air India.

And thanks to his position in the national carrier, from my childhood days, I enjoyed traveling by air, in style and comfort of Maharaja Class… The jumbos of Air India really fascinated me as a child and with each passing year, my interest in them kept on growing. So much so that I decided mentally to become a pilot of one of those 747s.

But I did not become a Pilot

Man’s wish can only progress towards reality when God concurs. In my case, God gifted me with powerful eyes and a nice pair specs and so my dream of becoming an airline pilot is still a dream.

I scored a distinction in SSC and had an alternate desire to become an Aeronautical Engineer – but the burdensome presence of Maths prevented me from opting for that even though I was getting admission. And then, like thousands of others, I joined Commerce and in due course of time the CA blood prevailed over everything else.

I ended up becoming a CA but airplanes and airlines were still part of my hobbies. Even during CA preparations, I used to read airline magazines!

I sent my resume to Singapore Airlines!

So much was the craving that the first CV that I sent was to Singapore Airlines! Knowing very well that it is unlikely that I will get a call. I was not interested in going in for CA practice as I found Taxation and Statutory Audit really taxing. I wanted to do something different – so in that pursuit, I started looking out for a good job or an assignment that I can manage on my own.

I struggled for several months and then my corporate life made a good and healthy beginning. And within a year and a half, I was able to finally enter the airline world on merit and Jet Airways became my third employer and the first in the airline industry. It was a dream come true for me and I simply liked the job.

I never felt that I was working, as airlines and airplanes were my passion and my work was though related to accounting was off-beat when compared to the typical book-keeping type.

I learned a lot in that company and ended up heading its Revenue Accounting unit as a GM at a very young age in comparison to those who were holding that position at the time with decades of experience. I progressed from there and moved on to head the function for 2 other airlines – one in India and one overseas.

I enjoyed the work even with Work Pressure!

Throughout my tenure in the airlines, I was positive and enjoyed the work though the work pressure was enormous, timelines extremely stringent as airlines being in the service industry have to work 24 X 7.

My wife and son and parents have seen me sometimes on the following calendar day but thanks to my passion, I always felt at home.

The best phase of my life was when I was overseas and working for an airline – the work environment was considered to be the toughest within the industry. However, my base was solid and passion too played its role very well and I felt that it was a lot easier than what was perceived.

It was a good exposure in dealing with people from different cultures, countries, and backgrounds. The flow was smooth – but my son was disappointed with the quality of education there and after due pondering, I chose to give his education priority over my professional satisfaction and we returned to India for good.

How I became an Entrepreneur?

By then, I had completed 2 decades in the industry and in my core specialization as well and I decided to do something different and become independent from the clutches of the employers. I had many tempting offers from the industry within India and overseas but I preferred to go the independent way. 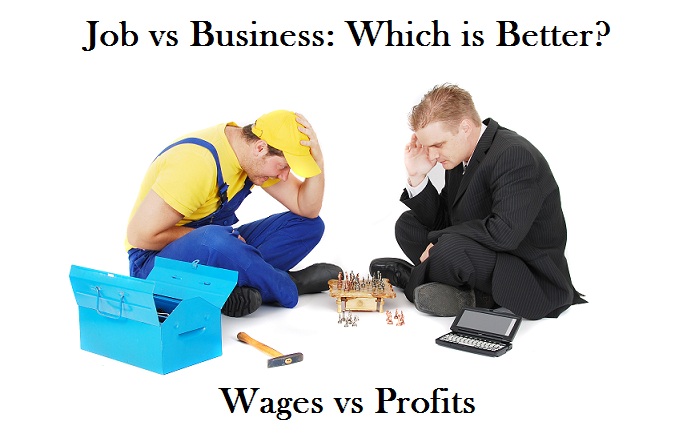 My family was with me and backed me solidly – I was in that age frame where if my entrepreneurial attempts fail, I would still have the opportunity to get back with humility to the corporate world. Initially, the going was tough and at times making me wonder if I had taken the right decision.

However, my wife was with and behind me like a rock and I remained committed to getting the first assignment before the bank account reaches alarmingly low.

I got my first assignment

Patience and eternal trust in god always pays and I got my first independent assignment overseas. And all in the house were happy and I was thankful to God for showering his blessings. It lasted for a few months – it was a unique experience as I was the boss of myself and had only the mirror to report to in relation to my work.

It was a great feeling and I still remember the moment when I sent out the first set of FEMA documentation to my bankers to get the inward remittance. Thereafter I have been able to keep the entrepreneurial spirit going with one assignment at a time – though I can manage more than one, I chose to work on my newer passion towards stock markets.

Since the past year, I have again been an active student of stock market and am learning by the day and have been helping a few make money by putting my knowledge to test.

I had my first stint as a trader for 2 years which was full of ups and downs and I had to take a sabbatical from the markets as I got an overseas assignment with my sleep hours slot was the active market hours slot in India.

Once I was back, I invested a significant amount in getting trained by the best in India and have since been working very hard to make this as my next profession – where I do not have to source business as the opportunities come knocking on the doors as long as I ensure that I have capital to take advantage of the opportunities. 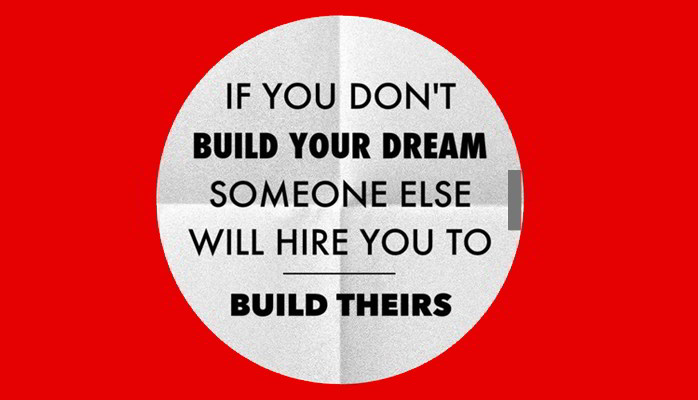 From Automobiles to Stock Market!

So in my career so far, I moved from automobiles to IT to airlines to BPOs to TMCs to stock markets – I have learned a lot from the markets – about stocks and related matters and about myself as well.

My ride thus far may seem like an uneventful and seamless but I went through quite a few rough patches and I always remembered the saying – If it were not for the rocks, the stream would have no song and also – Ships are safer in the harbor but they are not meant for the purpose.

In comparison to the present times, my salary was not that high especially after the 9/11 attacks in the US which changed the game altogether. Airlines turned out to be a good place for its vendors and not its employees.

16 habits which helped me become successful

However, I am thankful to some of my habits which helped me reach where I am today.

Few of these are

The above may sound like a well-written script but the journey through these was tough, challenging and at times tense. There are still many who wonder why I am not working with one of the airlines and encashing my experience and knowledge.

I tell them that I am now used to not listening to anyone but my boss in the mirror and he is a tough guy and would not release me.

Should every salaried person become an Entrepreneur?

I have, in the last few years, counseled many regarding several matters, including why one should ultimately work as self-employed – this in no way undermines those who are in service.

Due credit also goes to some of the airlines/entities in India and overseas with whom I was/am associated as they helped me reach the state of Independence. Only those who are born entrepreneurs with no financial burden can start as a self-employed.

People like me and possibly many of you have to toil hard before even thinking of being on our own. Carefully note that since I am on my own, my insurance [car, health, critical illness, travel, term plan, etc.], welfare, administration, travel, infrastructure, capital expenditure, communication and possibly a few more are all on to myself.

Life as self-employed is not rosy!

So, please do not think that life as a self-employed is rosy. I strongly believe in the adage – ”The grass is greener on the other side.” 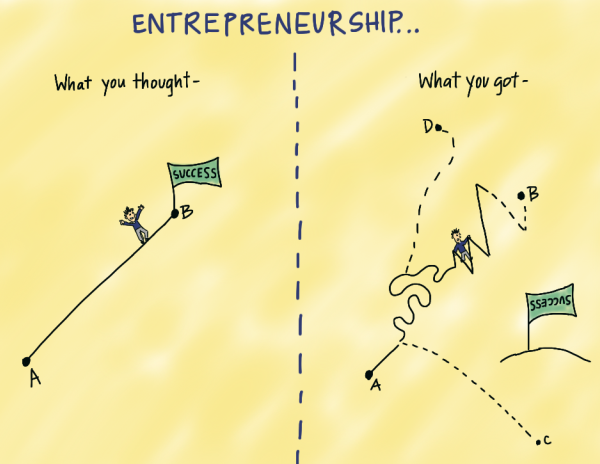 We have to learn to look at things from a neutral perspective and learn to remain humble, utmost patient and irrevocable trust in God and in our abilities to do the right things.

When we are looking at our future, we need to keep several things in mind – it is not possible to write about all these now, but suffice to say that such decisions have to be thought through and situations 10-15 years from now should also be considered before concluding on a decision.

My story is nicely covered by this picture which reflects the dream, the then reality and the present:

I think it was a fantastic life sharing and there were many lessons which can give you a great insight into decision making. It’s always a great thing to read someone else story, you get lots of inspiration and see how other people handled some situation. You get an idea of how things look like on the other side, you read about their struggles, achievements and eventually add the learning’s in your life.

I thank Mr. Umesh for this contribution and wish him the best of luck!

If you feel that you can also contribute to this blog (it can be an article, life sharing, valuable info), just get in touch with me using this form