Duplicate UAN? Here is step by step process to solve it!

Today we will talk about the issue of duplicate UAN, which has confused a lot of employees. A lot of people have contacted us that 2 UAN were generated for them by their past employer and current employer and now they have no idea what is to be done in this case.

You can see following question which was posted by one of the reader of this blog.

I left my previous company on 1st April 2014 and joined new company on 7th April 2014. Now problem is I have been allotted UAN no. from both employer. I want to withdraw whole amount of EPF (Employees’ Provident Fund) of previous employer.

So kindly guide me what to do in this situation?

Why does multiple UAN get allotted?

UAN (Universal Account Number) as you all know, is a single unique number for each EPF member for all this EPF accounts under them. You can see the UAN as the folder (UAN) which has various files under it (EPF accounts)

Before we discuss how to solve the duplicate UAN problem, I want you to know how two UAN are generated and why does it happen?

A lot of employees do not want to disclose about their past employment, hence they do not quote their old UAN number to new employer. In that case, the new employer will generate a fresh UAN for the employee. This is one of the reasons for having duplicate UAN number.

This is another reason why another UAN gets generated by new employer. I have no idea why that happens, but this is the reason which is mentioned by the EPFO in their recent circular which talks about the issue of multiple UAN allotment 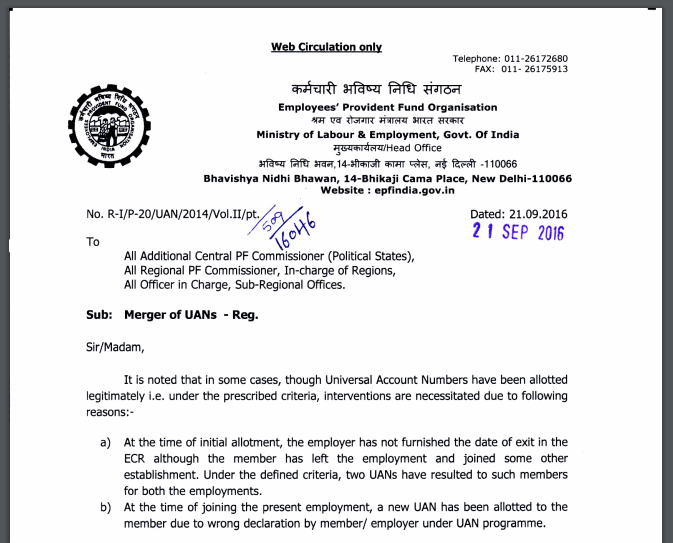 How to solve the two UAN problem?

Note that each person should have only one UAN number (like PAN), hence if you have multiple UAN, it’s not allowed and creates problem in the EPF system, because is no proper track. Hence, as soon as you come to know that there are multiple UAN assigned to you, you should cancel one of the UAN (mostly the old UAN) or should try to deactivate one of them

Step #1 – The first step if that you should start the EPF transfer for all the EPF’s which are not under the latest UAN generated. This can be done using the OTCP portal of EPFO . I am not going in details here, but first you need to make sure all the old EPF’s are transferred and linked to the new UAN.

Step #2 – In the next step, the EPFO system will automatically identify those UAN for which the EPF transfers have happened and completed. Once they find the idle UAN, they will automatically deactivate that UAN. You don’t have to do anything here. This deactivation process will take place from time to time as per decision taken by EPFO. Once the deactivation happens, your old member id (your old EPF accounts) will be linked to new UAN.

So, from your side all you need to make sure is that all your old EPF’s are transferred to the recent EPF account.

If you are already sure that your past UAN does not have the EPF linked to them, then you can mail your old UAN number along with recent UAN to your employer and to uanepf@epfindia.gov.in . They will verify your UAN’s status and deactivate the old UAN.

Let us know if you have more clarity on this subject or if you have already completed the process for the benefit of other readers.

14 replies on this article “Duplicate UAN? Here is step by step process to solve it!”