Tax on EPF withdrawal & other key highlights from Budget 2016

Before I even start this article, please watch the first 5-6 min of the following video which comes from Ravish Kumar of NDTV and you will get the hottest points of discussion in this budget, which is taxation on EPF withdrawal.

The video below discusses various viewpoints from govt representatives, economists and some other people on why this is a foolish decision from govt and at the same time, why it makes sense to tax the EPF withdrawal. You will listen to the full video if possible for you, or else at least listen to the first half.

So, I was watching Budget 2016 yesterday and desperately waiting for the personal taxation announcement because that’s the main thing I understand :). By the end of the budget speech, it became clear that there were no changes in income tax slabs nor 80C limits and all hell broke loose on the news that the EPF withdrawal will be taxed on the 60% corpus.

The whole twitter and facebook was full of angry people showing their disappointment on the budget and how it has betrayed the salaried class. The issue went really out of hand and a twitter trend #RollBackEPF started trending and every person from across the country wanted it to be taken back. It was really a crazy day. And today govt has clarified that the tax is only applicable on the interest component only (more on that later in the article) 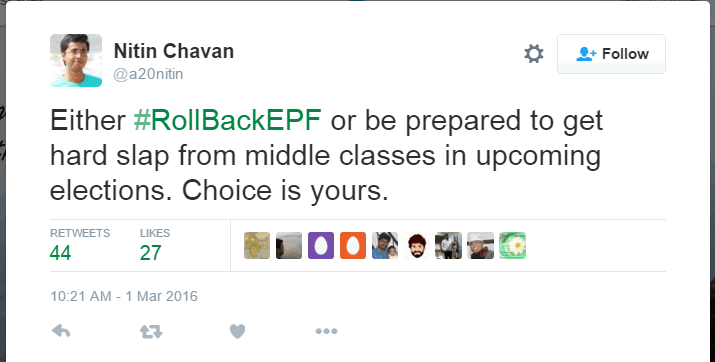 This budget’s major focus was on the rural economy and farmers which are neglected for decades anyways. Only time will tell if the efforts were taken in this budget work or not and if things improve and get better for farmers and rural economy. Let’s wait for that.

Let’s look at the budget highlights one by one. My focus is to share all the major points which concern or are related to a common man.

Let me again share it. There was no change in the income tax slabs or the 80C limit. Everything remains the same on this front. Everyone was expecting that the slab will be raised or 80C limits will be increased, but that didn’t happen. There were conversations like the basic exemption limits should be raised to at least Rs 5 lacs from the current 2.5 lacs, and this was, in fact, Arun Jaitley’s demand in 2014 that the limits should be raised. Not sure what’s coming in his way now when he himself is the decision-maker.

Now 40% of the NPS corpus will be tax-free at the time of maturity, rest 60% corpus will be taxed if you withdraw it fully. However, if you buy an annuity (pension) from the remaining 60% corpus you won’t have to pay the tax. However, note that the pension amount which you will get will be normally taxes as the income in your hands.

This means that if you have Rs 1 crore in NPS at the time of maturity, if you withdraw the full amount, then 40 lacs will be tax-free, but the rest 60 lacs will be taxed. Now if the applicable tax at that time is 20% (just an example), then 12 lacs will go in tax and you will get the remaining 48 lacs in our hand. So a total of 88 lacs you will get out of 1 crore. However, you can choose to just take 40 lacs in hand and leave the 60 lacs in a pension product to generate the monthly income (which I think many will choose anyways).

One good point is that if the NPS holder dies, then the full death claim will be tax-free in the hand of the receiver.

Also, an important point here is that there is a lot of debate and confusion around this point as of now. We should wait for more clarification on this from govt in the coming days. 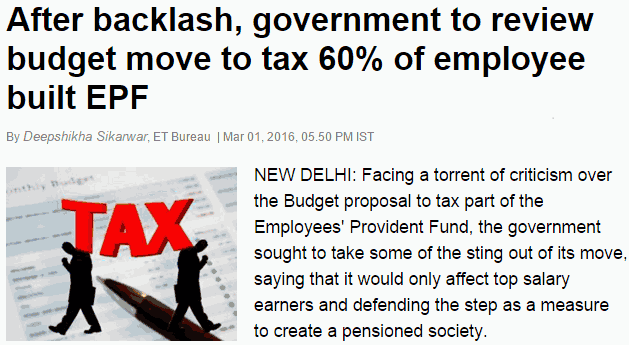 PPF is untouched and still remains full tax-free as of now. Yesterday there was this confusion, that NPS, EPF and PPF, all of them are brought at the same level and many worried people whose PPF was going to mature in the coming months/years panicked and started asking if their PPF corpus will also get taxed.

So at this point of time, PPF remains the only investment product which comes under EEE (Exempt, Exempt, Exempt)

5. Employer contribution in EPF restricted to 1.5 Lacs per year

Now an employer contribution is EPF is restricted to Rs 1.5 lacs per year or 12% of the basic salary whichever is lower. Till now there was no limit like that, but with this budget that is changed. Incase employer does contribute more than 1.5 lacs per year, then it will taxable in employees hand.

Also, note that the govt will now contribute the 8.33% EPS part for the employees from its own pocket for the first 3 yrs for the new EPFO members.

There will be a health insurance scheme launched soon which will provide Rs 1 lac of health cover to poor families. Also, the senior citizens who belong to these families will also get an additional Rs 30,000 top-up cover on top of Rs 1 lac. The govt budget documents give the reasoning for this scheme.

Catastrophic health events are the single most important cause of unforeseen out-of-pocket expenditure which pushes lakhs of households below the poverty line every year. Serious illness of family members cause severe stress on the financial circumstances of poor and economically weak families, shaking the foundation of their economic security

As per sec 80GG, those who do not get HRA in their CTC from their employer can now claim up to Rs 60,000 per year as a deduction under rent paid. Earlier this was only Rs 2,000 per month. This will help a lot to those people whose employers are not giving them HRA Component. Rs 5,000 though is a less amount, but still a respectable deduction at least.

In other word eligibility will be least amount of the following :-

The first time home buyers will get an additional Rs 50,000 tax exemption in interest part apart from the current exemption, provided following points are true

9. Dividends above Rs 10 lakh to attract an additional 10% tax

Now if a person is earning more than Rs 10 lacs of dividend from stocks will have to pay the tax of 10% on it. Right now companies anyways pay DDT (Dividend distribution tax) on the dividends declared. I think this is anyways going to impact only those who have very high investments in stocks and they earn big dividends. A normal investor will mostly be out of this.

A new cess called Krishi Kalyan cess of 0.5% is added to service tax, which is applicable to all taxable services, which simply means that the service tax has now gone up from 14.5% to 15%. While this 0.5% does not look much, its actually going to be a decent amount for a common man in addition to what we pay.

I think it will add a few hundred extras in your expenses if you count entire years of expenses. This will be applicable from 1st June, 2016 so you still have some time 🙂

1% TDS is proposed on the purchase of luxury segment cars costing Rs 10 lacs or more. The same TDS is also there if one buys any goods or services exceeding Rs 2 lakh. On top of this, an infrastructure cess of 1% is on small petrol cars, CNG cars and 2.5% cess on diesel cars are there, which means that cars, in general, become a bit expensive.

Earlier, if one used to buy/construct a property, one had to get the possession in 3 yrs itself to claim the tax benefits on the interest paid under sec 24. Now it has been raised to 5 yrs. This will help those real estate investors who have not got the possession due to delays from builders.

Over the next 3 yrs, govt plans to roll out the ATM’s in post offices so that more people in rural areas can access the banking services. The department of Posts plans to bring around 25,000 post offices under this in the next few years.

There are many more things in the budget, but I am not going into each of those. The points above are the main highlights which I am discussing here. You can read all the points of budget in this PDF file

Please share how do you rate this budget and what do you think about the move on the EPF taxation?