A lot of investors still do not understand what is the meaning of TDS (Tax Deducted at source) is and how it’s related to their taxation.

While the concept is very easy overall, I have seen that tons of investors still get confused when TDS is cut on their Fixed Deposits at maturity and they feel that they don’t need to pay any tax now, or feel that they don’t have to pay any tax on their Fixed Deposit interest just because it was below 10,000 and TDS was not cut.

So in this article, let me make sure that you are 100% clear about Tax Deduction at Source and what it means. 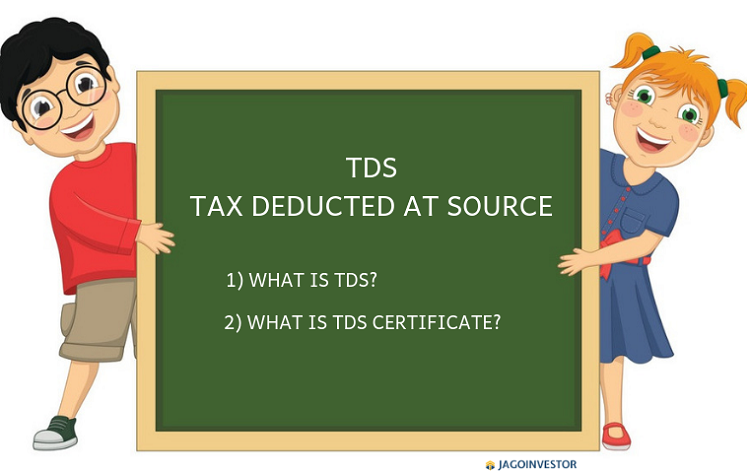 What is Tax Deducted at Source?

TDS or Tax Deducted at Source is a tax collection mechanism by Government of India, where at the time of transaction itself, the tax is deducted by the paying party and directly deposited to the income tax department.

It’s assumed that the receiving party (one who gets the money) will have some tax liability. Now at the end of the year when you find out your tax liability, the TDS amount is the tax you have already paid and now you need only pay the balance amount.

So in a way, Tax Deduction at Source is a good thing for 2 reasons. You automatically pay a part of your tax liability and income tax department receives their tax collection. So TDS is always a mechanism, to reduce tax theft. Let me give you some very simple examples of TDS collections

When a company pays salary to employees, you must have seen that they pay the salaries after cutting the tax amount.

So at the start of the year itself, after the employee declares his 80C investments, HRA, LTA and other tax deductions which he will avail, the employer ‘estimates’ what will be the tax outgo of the employee and then each month they cut a certain amount as tax and pay directly to the income tax department.

And then at the end, the employee calculates his actual income tax liability to be paid. If the Tax Liability is more than TDS cut, he pays rest of the tax money and files the returns. If the Tax to be paid is less than the TDS amount, in that case he can claim for a refund in the tax returns.

When you open a Fixed Deposit, you earn some interest in a year. Now the rule is that if the interest amount each year exceeds Rs 10,000 on your fixed deposits (across the different branches of the same bank also), the TDS has to be deducted by the bank.

That will make sure that you pay your tax in advance itself (you know how difficult it is to pay tax when you have finished that money at the end). Note that TDS is also applicable in case of Sweep in Accounts and MODs (Multi option Deposit Scheme by SBI)

What about NRI Fixed Deposits?

In case of NRIs, the sad part for them is that there Tax Deducted at Source is cut @30% on any interest income earned on NRO fixed deposits (no limit of Rs 10,000 interest.)

Even if they earn Rs 1,000 as interest, they still pay TDS @30%. Note that the Fixed Deposits in NRE and FCNR accounts are totally tax-free in India, hence no Tax or TDS. A lot of NRIs send money back to India and invest in Fixed Deposits in their NRO account.

If they have to pay tax at the end, well and good, else they need to file the tax returns and claim it back. NRI’s should read this article on TDS applicability in economic times and also read this article to understand how NRI’s can claim exemption on TDS is applicable for you.

If you want to know more about the tax applicable on NRE, NRO and FCNR account then watch this video:

Make sure you quote your PAN

A lot of times, PAN card number is asked by banks or at other places before the payment is made to you. Do you know that there is a reason for it? If there are any TDS to be cut, they first check if PAN number of the receiving party is available or not.

If PAN number was given by the party, then the TDS is cut at a lower rate, but if PAN number is not quoted, then TDS cut is high.

For example, in the same Fixed Deposit amount, do you know that the TDS is cut @10% if PAN number is given, but if PAN is missing, then its 20% Tax Deducted at Source? These are the numbers of individuals (not companies, LLPs or corporate bodies.)

You should also know that in this budget Tax Deducted at Source @1% is to be cut for any real estate transaction above 50 lacs!

I want to invest where TDS is not applicable

A lot of investors try to invest in bonds, securities or at those places where TDS will not be cut. They do not understand that TDS is nothing but paying tax in a different way. I assume that they thought that if TDS is not cut, they don’t have to pay any tax, which is totally wrong.

All they are doing is taking the onus on themselves to pay the tax at the end. Or many might be finding ways to save the tax by various means suggested by their CAs.

A lot of investors also try to open a lot of small FDs and break it in the same bank but in different branches or in different banks too, but they do not know, that in this era of core banking, banks and tax officials can just punch your PAN numbers (yes, my CA told me this) and get all your tax-kundali and how much fixed deposits you have and how much interest you earned out of your investments.

So you need to pay your tax on those amounts anyway, whether TDS was cut or not. If TDS was cut, in a way it’s better because you pay the tax in advance itself and don’t have to arrange for tax amount at the end of the year. It really pinches at the year-end to arrange money and see it go into tax!

Make sure you ask for TDS certificates

Whoever cuts the TDS and pays it to income tax department has to issue you TDS certificates as the proof that you have paid the TDS. The document they give you is called the ‘TDS certificate.’ You would need this document if you want to show that the TDS amount is being adjusted in your tax payment.

Generally, as a rule, all the parties send the TDS certificates to you, but make sure you are proactive in asking’ it from them.

Myth: I don’t have to pay any tax if TDS is deducted

At a lot of times, it so happens that you don’t have to pay any tax at the end of the year and you already know it, but just because your deposits are earning more than Rs 10,000 of interest income, the bank cuts the TDS amount and then you have to claim it back by filing a return.

In this case, if yearly TP is more than the TDS then the investor will have to pay the remaining amount left after deduction i.e TP – TDS = Remaining Tax Payable.

In this case, If yearly TP is less than the TDS then the investor will have to file for tax return because the tax which he was supposed to pay was less than the deducted tax. 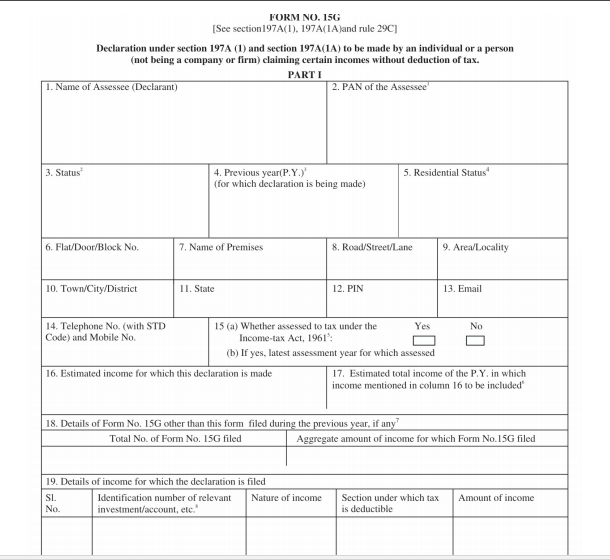 All those people can simply submit Form 15G/15H to bank (each year) and then the bank will not cut the TDS (my father in law told me how Bank of Maharashtra guys in some particular branch still cut the TDS even if you deposit the Form 15G/H and how they are such a pain).

Let me share with you a little tip which a lot of you might know already, but it will surely help new people. If you are a salaried employee, your employer must be deducting the tax each month already and you know that you don’t have to pay any tax at the end.

But now if suppose you already have made some fixed deposits or some investments, where the Tax was deducted, then you have already paid some part of tax liability.

Your employer is not aware that you have already paid some tax through TDS route. So in the Jan-Feb season when they finally ask for your investment proofs, you need to also give them form 192 and deposit the TDS certificates to your employer so that he can adjust the Tax paid and pay you back the extra amount. (March month salary is generally higher due to this money coming back and also because of HRA/LTA reimbursements).

I hope you are now clear about TDS and how it works. If you have any doubts then put your query in the comment section.