I have written almost every possible article on Life Insurance and even Health Insurance, but strangely I still find a lot of investors asking questions which clearly shows that somehow, somewhere they do not understand what is the underlying business model of  insurance business and how are the products designed overall. Let me use simple stories and recreate some examples which will show you how things work in any insurance business. Lets move on ..

I see a lot of people saying something like – “How can these companies offer 1 crore term plan by charging just a small premium of Rs 10,000. Its surely a racket!”

Then a lot of people still feel that insurance companies are cheats and they will not pay out when a claim arises, just to make sure that they do not have to pay a big amount from their pocket. I am not advocating any insurance company here, nor am I saying that I have a solution to your doubts. All I can do is share what insurance is all about. This should surely help you understand the business model of insurance companies and how they make money. You can then choose to trust the system or reject it. Note that In our 100moneyactions program we have one of the tasks as completing your life insurance and health insurance with basic support system, So if you have still not registered for it, do it now.

Insurance Centuries Back – Lets go back in History

Insurance as a concept, is not a new thing in this world. It’s been in existence for centuries. Let me start with story which will give you some idea about insurance business and its evolution. Long back, there were businessmen all over the world, who traveled from one country to another for doing trade and business . They sent their stocks, inventories and material across globe on boats and ships. A lot of times when they used to send their ship from Point A to Point B, it so happened, that some ship drowned and everything on the ship got wiped out.

And this happened 10% of the time on an average. Out of every 10 ships which started from Point A, only 9 reached the destination and one businessmen almost surely went bankrupt. So you can see that the certainty was about the loss of 1 ship, but there was uncertainty about “whose” ship it will be (just like there is certainty that one an average 1-2 person will die in a city in accident for sure, but who will it be is not sure) .

So all the businessmen started to think over the issue and they found the solution. They started collecting 10% worth of the stocks from each of them, collected it in a bag. When each of 10 businessmen did this, the bag was full of money which would compensate any ship owner who was the unlucky one and lost his ship. If there was no accident and all the 10 ships arrived safely at their destination, there was no issue at all. But when there was a ship lost, the whole bag of money was given to the one who was affected, which meant that he didn’t suffer other than temporary shock and resentment.

So now if you see closely, you can relate this with insurance. These businessmen were doing nothing but mutually insuring their risk by pooling in the money (premium) and then compensating the unlucky business man in case of a disastrous eventuality (sum assured equal to 1 ship worth).

Any ship owner, who did not wanted to participate in this (thinking he would loose that 10% money if his ship was safe), was free not to participate, but then he was just taking a huge risk of wiping out everything he owned and going bankrupt.

So you learnt – What is Insurance exactly !

So you are still not clear about the concept of insurance with this small but simple story? Let me now rephrase it in modern terms.

Insurance is all about transferring the risk to someone else, by paying a small cost called a premium. The person who runs the insurance business (for profit!), takes care of all the research and data which makes the business viable in long term. Let me attempt to build a simple (imaginative) job loss insurance business right in front of you.

Let’s say, I decide to launch an insurance product called “Job Loss Insurance” for IT professionals  . So, I research and find out that out of every 100 people in IT sector sector, 3 lose their job each year for some reason or the other, but then they are able to secure another job within 6 months (just an assumption). Now assuming that the average salary of a software professional is Rs 50,000 per month, it means that I can create a job loss insurance product which says –

“Pay a premium X each year and in case you lose your job, we will pay you 6 months salary to you, so that you can keep your mind cool and search for another job and pay your home loan EMI, children school fees and other commitments.”

Anyways, so I know that out of 100 people, 3 people on an average will lose their jobs who would need 6 months of oxygen till they find another job (50k X 6 months = 3 lacs) . So, I would need 9 lacs  to pay all these 3 claims which will arise each year.  So now, I need a market of 100 people to whom I can pitch this product and generate 9 lacs of total money. Which means that I will have to price it as Rs 9,000 per person per year. In short 100 people will pool in Rs 9,000 and generate 9 lacs and then out of those 100 people, 3 will loose the job and file for a claim.

So, I will make sure that I keep sufficient capital with me before starting the business (what if in first year itself, there are 6 job losses out of 100). That’s the reason, why there are IRDA norms that a particular amount of net worth should be there with every insurance company before they get a licence and its called Solvency Ratio.

So now, based on their premium pricing strategy and overall experience in next many years, an insurance company is very profitable in long run (high probability) or they suffer a loss. That might explain, why most of the new insurance companies are in a loss at the moment (insurance is a long term business, very long term). 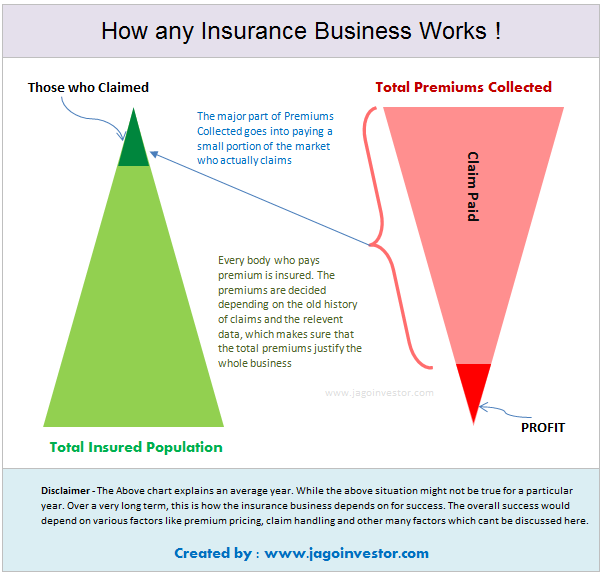 Premium Increase for some customers

Now a lot of people wonder, why insurance companies increase the premium for some customers (called as loading the premium) . Let me show you with same example.

Now as per my data research, There might be a category of IT guys who have a higher changes of 5/100 job loss and that one is Software Engineer whose company is not US based and they are into Embedded systems . So in short a IT guy who is into Embedded systems with a Non-US based company is more dangerous customer to me . While I will still give him insurance, but I cant charge him same premium like every other IT guy. So I would charge him not 12,000 per year, but 24,000 per year – because he is risky! .

While he might not get fired by his company, I am taking a very high risk against him and I deserve to be paid more, otherwise it does not make any business sense to me. Now if he hides this information from me and does not tell me before hand while filling up the form that he is working in embedded systems, that too with a company which is not US based (guys, just a random assumption, don’t take it seriously), should I be paying him any insurance money if he actually loses his job? the answer is rude NO. I can’t be emotional here and look at your tears! You cheated me, so you pay for it!

This might explain to you, why insurance companies apply loading, when you tell them you are a smoker, or you drink, or you are obese or you are working for the Army!. You are a high risk customer, and as per business rules, they will definitely increase your premium, even you will do the same, if you started up a insurance business. Wont you ?

Will company really pay me at the time of claim ?

Yes, it will. Because for you 1 crore at Rs 8,000 per year might look very absurd, its actually not . Because Insurance is a volume’s game. One individual case is not going to affect a company, because it was already factored in. It was known to happen. Thats why the premium was collected and you will be paid because thousands like you will NOT file for claim. My premiums might be used to pay your claims! . So Like in my example, when a person loses his job, I know that he is part of that small group which is surely going to lose his job. I will not be worried paying you 50,000 per month for next 6 months even if you paid me just 12,000 in a year. I know for sure, that the rest of the 97 people will not lose their jobs and I can surely pay you what you are insured for.

Amount Accumulates and grows into a big pool

If in the first year, less than 3 people lose the job, then I have extra money left at the end of the year and I can carry forward this money into future for those bad years when more than 3 people will lose the job. I can also invest this money, which will grow over time, and If I have done my research right, I am surely going to be profitable over long term.

Which explains why premiums are different for different companies.

Auto Insurance – They know all the data that if a car is older than X number of years, what the chances of it crashing into another one, and then how many premium makes the business viable and profitable.

Health Insurance – Health insurance companies know the data about the hospitalization charges, the probability of a person of certain age to get hospitalized in next X yrs and all those kinds of data. So when they price their policies, they are smarter than you. You might look at an individual case of yours and feel that you will profit from it (which can be the case), but surely its will not be a loss making proposition for the company either (over a long term, collectively).

Life Insurance – They know how many people out of 100, will die on an average in a year and within how many years. So if a big number of people pay for some years at least, it will be enough to pay the dead ones families.

Credit Card Insurance – There are insurance businesses around insuring credit cards. They know on an average out of 100 credit cards, how many are lost and on an average what is the loss amount. So they keep the premium such that they still make profits over a lot of customers.

I would like to conclude this article by telling you to understand the business model of insurance companies. Once you get it, suddenly all the doubts you had over years will go away. Insurance is a very strong concept which is a win-win model for the companies and for customers. At-least we used some stories and examples in this article which was just for illustration purpose and dont start arguing the data and numbers from examples 🙂 .