Direct Plan of Mutual Funds – Everything you wanted to learn about it !

A lot of buzz is going around “Direct Plan” when it comes to Mutual funds. A lot of investors still don’t understand the full impact of Direct Option and if they should invest in the same old way or with this new option. In this article – we are going to unearth all the aspects of Direct and Normal Option of investing in mutual funds. 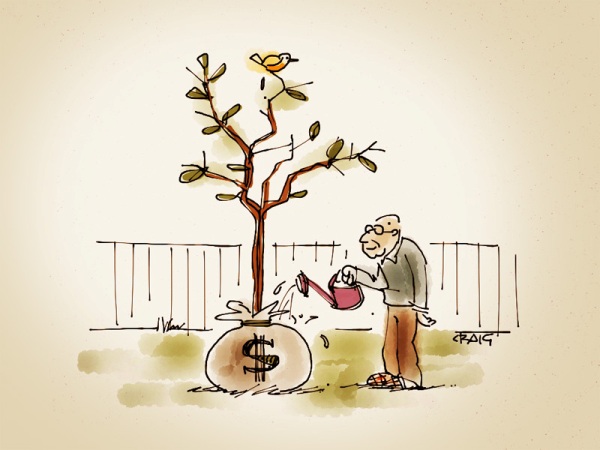 Direct Plan in Mutual Funds – What does it mean ?

SEBI few months back announced that all the AMC’s should come out with two options for each and every mutual funds scheme they have, One will be normal one (which you have been looking till date) , And Then the other option will be DIRECT PLAN, which will have a lower expense ratio compared to the Normal Option . This is because when you invest in mutual funds direct plan, there is no intermediary involved in between and a lot of costs which are associated goes away . That’s the reason direct plan will have less expense ration. So If I have to explain in one line. Direct option of mutual funds will have no agent in between , you will be directly investing with AMC . However with the NORMAL Option, you will be investing through an agent which can be any individual or a online broker.

A mutual fund scheme will have to affix “-DIRECT” word in their scheme name. So for example now there following options for investments if you want to invest in HDFC Top 200 mutual funds.

Its a big worry for those agents who are not adding any value through their advice and have HNI/big clients.

And guess what already Direct Plans are HIT among investors and a lot of investors and big corporate investors (who invest in DEBT mutual funds) have seems to have shifted to mutual funds direct plans. This is proved by the fact that in the first month of Jan – 2013 alone, 56% of the total incremental flow of 60,732 crores in mutual funds was through direct option, which is around Rs 33,830 crore, which means that out of total Rs 100 , which was invested in mutual funds, Rs 56 came in through Direct Plan and only Rs 44 came in through Standard plan, but the majority of that would be in Debt fund, but anyways – the point if that Direct Plans are already popular and investors have started taking the advantage.

Now lets look at the returns from Direct Plans vs Standard Plans and lets see some aspects related to it.

Expense ratio of a mutual fund has a deep impact on the final returns over long term. A small decrease in expense ratio can increase your long term returns by a very good margin, provided every thing else is same. Direct option of mutual funds are going to have a good enough difference when it comes to expense ratio. If you talk about equity funds, the direct plans will have anywhere from 0.40% to 0.75% less expense ratio compared to a standard plan . For example – If I have talk about HDFC Top 200 mutual fund , the standard plan has an expense ratio of 1.78% per year . Where as the Direct Plan expense ratio is only 1.19% , which is a 0.59% difference and whopping 33.15% less than standard plan , Means that you will save 33% costs when you migrate to Direct Plan of HDFC Top 200 as an example . Note that all the numbers I just quoted are as of 28th Mar 2013, and change in future. I checked few equity funds from HDFC Mutual funds and DSP Black Rock and found that that the ‘Direct’ option have lesser Expense ratio compared to their Standard Plans . Here is a snapshot for 5 funds. 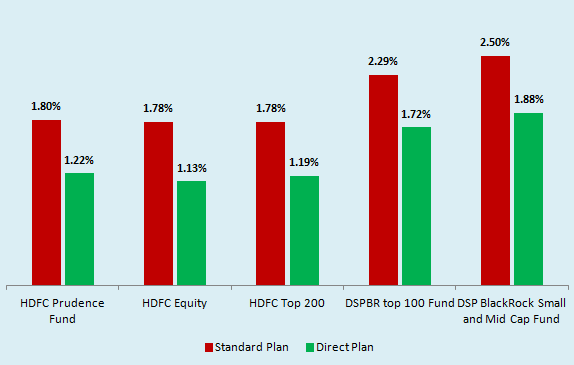 The Direct Plans took effect from Jan 1,2013 . Means that on Jan 1,2013 the NAV must be same for Direct and Standard Plan and from there, the NAV must be different for both plans. And As Direct Plan expense ratio is going to be lower, the NAV for direct plan should also be lower and the gap should widen too. To just make sure that its happening in reality. I picked up the same HDFC Top 200 and listed down the NAV for both standard as well as Direct Plan from Jan 1,2013 to Mar 26th 2013 and checked out the difference between them and I was correct . The NAV gap was growing and Nav in direct option was 0.13% higher than the standard plan NAV , thats just 3 months of difference and if you extrapolate in future, the difference might be as good as 0.5%-1.00% difference in a year. Thats a big enough amount, 0.5% on Rs 10 lacs portfolio means Rs 5,000 . Isn’t that a good ! . And if you look into very long term in your financial life , the difference will be very high, which we will see now

Considering the same example of HDFC Top 200 and their expenses ratio of 1.72% (standard plan) and 1.29% (Direct Plan) , What happens to your wealth after 10,20,30 yrs if you consider these two options ? Will the corpus you will accumulate at the end will be huge ? Even if we assume a conservative returns of 10% on equity in long term, the difference in corpus at the end is huge because of sizable difference in the expense ratio. Below I have provided the corpus of two options and the difference between them over 10 yrs, 20 yrs and 30 yrs. 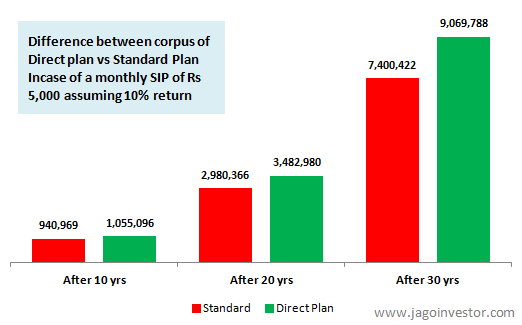 Note that these numbers and difference might look big to you, but you will not realize the difference to be very big in a short term like few months of every 2-3 yrs. Also you might argue that one might not invest for such a long term, but we are only highlighting the impact of such costs and its impact in long run.

So, Now I hope you must be clear about the Impact of mutual funds direct plan on your wealth.

Who should invest in Direct Options

Now coming to the important question – Who should Invest in Direct option of mutual funds ? A lot of people might feel that direct plan is for each and every investor , but thats not right way of looking at it . Only those investors should go with the direct plan of mutual funds who are

I guess a lot of people will fall into this category and would be ready to go the direct route for the kind of benefit they get out of it. However lets see who should not choose Direct Plan

Who should not Choose Direct Plan?

You must be wondering who should not invest in direct plan ? A lot of investors have very very good advisers , who have good capability to advice and record keeping abilities. The value of their timely advice is so much that it over weights the advantage of direct plan. So if you feel that you have an adviser who helps you pick good funds and helps you in removing bad funds over time and because of him you are able to get extra 2-3% returns on your portfolio, its worth paying commissions he deserves . Also It might happen that you are a busy person who wants a third party to handle your portfolio and inform you on time to time basis about your portfolio and whats going on where , you might want to consider not moving to direct plan.

So at the end , its about the question – “Is there any value in sticking with your adviser , platform or financial planner?” and if its adding enough value to your financial life , and do they deserve the commissions they get out of your portfolio with them. Its a question you need to ask yourself . Do not rush to convert your mutual funds into Direct plan .. Take some time to think over it and look at the long term effects of it.

How to invest in Direct Plan of mutual funds ?

The only thing you need to do is when you fill up the mutual funds investment form, there is an option called as “Direct Plan” there, all you need to do is put a tick mark there, If its ticked marked, then your investments will be into the DIRECT plan . Even if the agent/distributor puts his ARN code (the unique code which identifies a mutual fund agent) , he will not get any commissions from your investments. Also in some of the forms , that separate tick-mark option might not be available, in which case you have to mention the word “DIRECT” in the ARN column . Note that if you forget to mention that you want it to be under DIRECT plan and also the agent code is missing, by default the investment is going to be under mutual funds direct plan .

You can fill up this form directly with the AMC by going to their Office , or you can also use CAMS/Karvy for making investments , who are back-office partners for a lot of AMC’s . If you invest through CAMS/Karvy , still the investments will be into Direct plan, just make sure you do not leave the DIRECT unticked.

How to Change your Existing Mutual funds to Direct option?

Your existing investments in mutual funds will NOT switch to direct plans automatically, no matter you did it with an agent or directly with AMC (Read which AMC is better then other) . It will has the same expense ratio as of old funds.

To convert your existing holding from a standard to a direct plan, you need to submit a switch request. All you need to do is contact your AMC and ask for Switch reuest form . Which is a written request telling them that you want your existing mutual funds to be now converted into DIRECT plan . Once they get this request , they will process it , they will intimate you once its done . Your agent will not like you for this 🙂 .

Will my existing SIP’s be considered under Direct plan by Default? ?

All the SIP’s which were made through an agent/distributor will still be under the standard plan , you will have to manually request the switch to Direct Plan . But if you had any SIP which was done directly with AMC (without involving Agent Code) , in that case your SIP’s  done after Jan 1, 2013 will automatically be considered under DIRECT plan , but all the old SIP’s which were done before Jan 1,2013 will still be there under Standard Plan and the higher expense ratio will apply there.

Can you convert your existing Tax Saving Mutual Funds (ELSS) under Direct Plan ?

Will there be Exit Load applied when I move to Direct plan ?

317 replies on this article “Direct Plan of Mutual Funds – Everything you wanted to learn about it !”