Why you shall not obsess for getting “same day NAV”?

A lot of investors are quite worried that they do not get same-day NAV when they invest in mutual funds? There are days when markets are down by 1%, 2%, or even 3-4%, and it’s a great opportunity to invest in equities at lower NAV!..

However due to the recent changes by SEBI, Now the NAV is allotted on the realization of funds by the fund houses before the prescribed time of 3 pm. 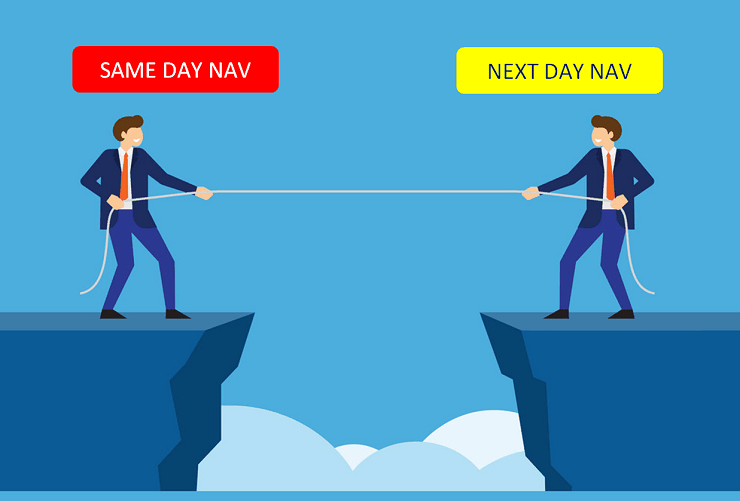 This simply means that most of the investors are not able to get the same-day NAV (except in a few cases). This frustrates the investors and they feel they are losing out on this opportunity because markets may go up the next day and they will not get a lower NAV.

In fact I am also seeing many articles and youtube videos teaching investors – “How to get same-day NAV in mutual funds” without even understanding if it’s worth the effort or not. There are some ways through which you get same-day NAV like if you invest through AMC portal directly or invest using UPI in the MFU platform or invest very early by 10 or 11 am so that your money reaches AMC the same day.

But is it really worth the effort?

So we thought of doing a small study on this topic and investigating if investors are really losing out a lot or not?

In our study, we found out that the same-day NAV or next-day NAV does not matter for investors over the long term and it has almost no impact on their wealth creation in equity funds.

Now let me share some stats and what we found

For this study, we picked 3 equity funds that are quite old, which were

Also, these are at least 18 yrs old funds and we downloaded the NAV of these 3 funds since inception. We have the data for a total of 4350 NAV points.

As a next step, we assume that there is an investor who wants to invest when markets are down. For that, we picked all those days when NAV of these funds came down by 1%.

Then we also found out how many times NAV of that fund was again down the NEXT day!!. Let me show you the data 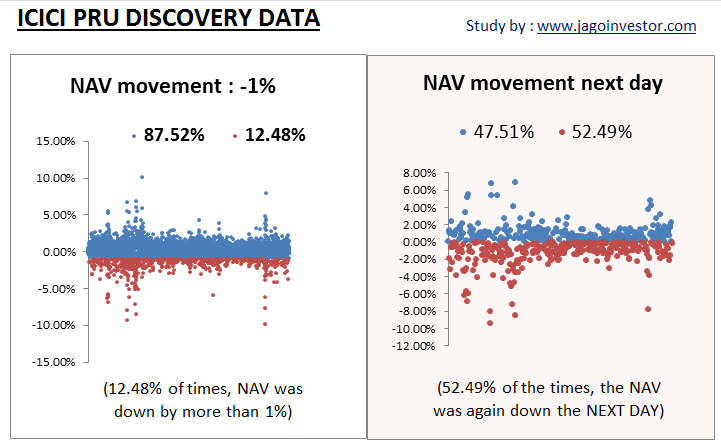 What happened the next day?

This simple means that on average, the next day NAV was actually lower than the day of investment and it was a good thing to get the next day’s NAV rather than the same day’s NAV.

Let’s assume that a person invests Rs 10,000 in the fund whenever NAV of the fund is down by more than 1%, then there are two cases..

We found out that the wealth created was MORE in case 2 actually, however, the difference was not significant enough to brag about. Let me show you the numbers

The difference between same-day and next-day NAV is roughly 0.41%, so by getting next-day NAV the investors create 0.41% more wealth, In this particular case, it was actually a good thing for investor to NOT GET the same-day NAV 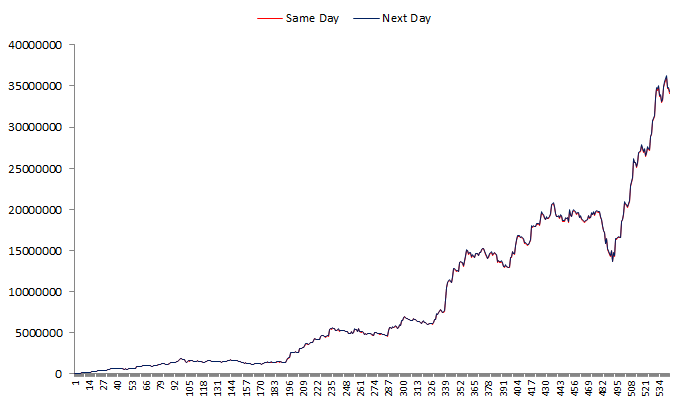 If you look at the graph above, there are actually TWO charts. The red line is the growth of wealth (with Rs 10,000 investment every time markets fall by more than 1%) in case the investor gets same-day NAV. And there is a black line that shows the next-day NAV case. You can see that both the lines are so close that you can literally just see one single line.

Data with the other two mutual funds?

Let me also show you the same study results with Franklin Prima Plus and Birla Equity Hybrid 95 fund.

Incase of Franklin Prima Plus, whenever NAV was down by more than 1%, the next day NAV fell again 56.83% of the time and it was more probable to get a better NAV if one got the next day NAV.

Investors created roughly 0.26% more total wealth by getting the next day’s NAV 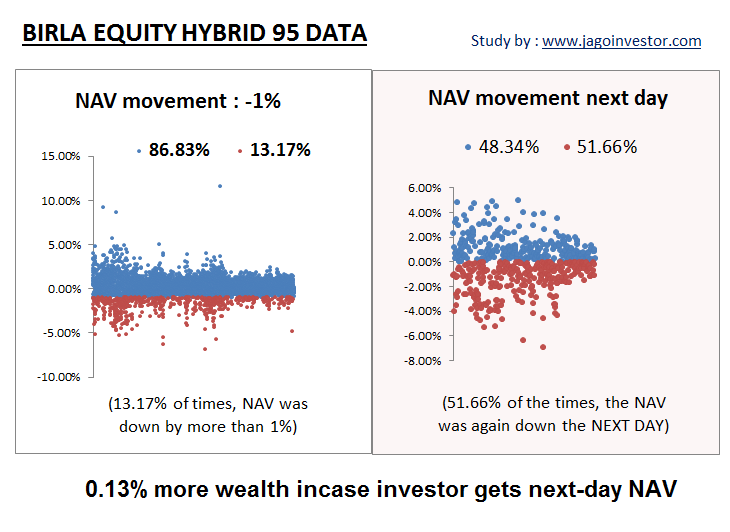 In the case of the Birla Equity Hybrid 95 fund whenever NAV was down by more than 1%, the next day NAV fell again 51.66% of the time and it was more probable to get a better NAV if one got the next day NAV.

Investors created roughly 0.13% more total wealth by getting the next day NAV.

Markets down by more than 2% and one got NAV after 2 days?

Let us also see what if we changed the data a little bit. What if one invested when markets were down by more than 2% and one got NAV after 2 days (not just the next day)?

If this happens then how will data change?

You can see above that even if one gets NAV after 2 days, still, two funds created more wealth. If you look at ICICI pru discovery fund, 3.54% of the times the NAV of the fund fell by more than 2%, and whenever that happened, 48.70% of the times, the next day NAV was further lower, it was beneficial to get the future NAV and not same-day NAV.

Eventually, by getting after-2-days NAV, the person was able to generate 0.70% more wealth compared to same-day NAV.

Conclusion and What we can Learn

By the time you may have figured out that while investors visualize that the day NAV can again go up, they forget that the next NAV can go down also and they can get an even cheaper NAV.

Note that we are not discussing in this article if it’s morally right or wrong for AMC to give you the next day NAV. Those are surely technological challenges that need to be solved. In this article, we just wanted to do number crunching to find out which path is better and I hope we did the job

We would love to listen to your comments on this topic and if you think otherwise?

21 replies on this article “Why you shall not obsess for getting “same day NAV”?”