How would you judge whether you have scored good marks in an exam? How do you define “good”? If you had a very very easy test and most of the questions were easy, would you call 80/100 a great score? NO. In the same way, if the exam was very very tough and made everyone cry, but you scored 75/100. Would you call it a great score then? Yes! So the point I want to make is there’s always a benchmark in any area to decide if the performance was good or bad. If you have done better than the benchmark, you did well, else you did bad.  This is exactly how mutual funds are to be judged. You can’t just say a mutual fund has performed bad or good based on the returns it has given in a time frame.

What is a Benchmark?

Each and every mutual fund has a mandate and rule defined on where will it invest and in what proportion. Like if a mutual fund says that it will invest in all the large-cap companies in India, then its benchmark would be mostly NIFTY because NIFTY is the indicator of the large-cap companies. And the whole point of investing in a large-cap mutual fund is that it should give you better returns then NIFTY because you can always invest in NIFTY and get the returns without any fees or risk. So only if a large-cap equity mutual fund beats NIFTY, you can say that it performed Good. Because if it does not then it has performed badly even after you paid him the fees, what’s the point of paying the fees and getting returns lesser than the Index which gives you some returns anyways.

In the same way a Small Cap Mutual Fund would have CNX MID CAP. One can just buy that Index and get returns from it based on the movement of the stocks in that benchmark. A mutual funds tries to take a call on what stocks to select and when to get rid of them to generate superior results and only if it can beat its benchmark, we can say that the mutual fund performed better than it’s benchmark.

So in any mutual fund, there is a benchmark and you can say that the mutual fund performed good or bad in a time frame only if the returns from a mutual fund are better than its benchmark for that particular period. Now based on this very simple rule, let’s see some cases. In the last few years, stock markets have performed badly. This bad performance from markets will obviously affect mutual funds performance too. So if a mutual fund has not given double-digit returns, can we conclude that mutual funds are bad investments? No.

Sandeep asked a question related to this

This kind of questions come to all the investor’s mind, this happens when you dont know how exactly you should judge a mutual fund’s performance. The only way here to say is HDFC Top 200 did good or bad in the last 1 yrs is to see if its return is more than its benchmark or less than its benchmark and to what extent?

Now lets look at 5 yrs performance of a tax-saving fund called Escorts Tax Plan, The fund has to give -15% return on absolute level in last 5 yrs (1 lac became 85,000) and an agent can say – “Sir – markets were doing badly in the same time, that’s the reason the fund has given bad return’s, in future it would do great” . In this case, all you need to ask is – “Fine, I can understand that market performance affects fund performance but has it performed better than the risk-free benchmark it was following? “

If you look at its benchmark “Nifty”, it has given a 24% positive return in the same period. This means that the fund has performed worse than the index which is totally free, while the fund has not performed even after bring run by professional fund managers. Then what’s the use of that fund.

Note that the duration should be good enough like more than 1 yr at least to say anything and the gap between the fund performance and benchmark performance should also be considered. You can say that a fund was bad just because its returns were 8% and the benchmark was 7.8%. that is very much close and does not conclude much.

The following are some of the very good potential mutual funds for 2012 and they are really doing good overall. Let’s see their returns overall for 5 yr and 3 yr timeframe along with their benchmark returns. You can see some funds outperformed their benchmarks with huge margins. For example, Quantum Long term equity fund has return 28.38% in 3 yrs compared to just 14.78% from its benchmark which is Sensex. Thats 100% more, really brilliant. 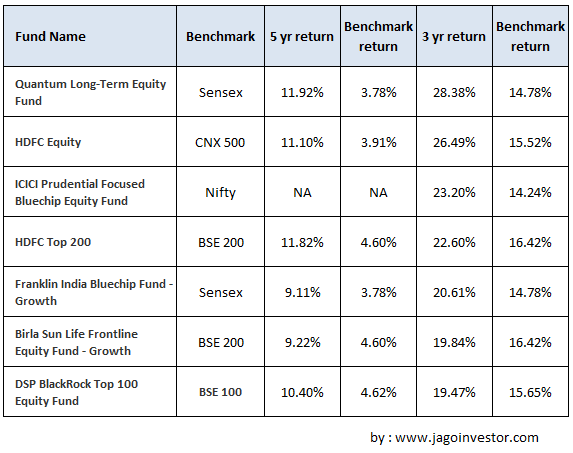 So overall the learning is that if you want to find out some good performing mutual funds, you should be looking if a mutual fund has outperformed its benchmark over several years with a good enough margin or not. If it has consistently done that, you can be clear that fund management is going well.

How often do you look into the benchmark? What else do you think should be looked at while judging mutual funds?

128 replies on this article “Mutual Funds Performance vs Benchmark Performance”