POSTED BY Jagoinvestor ON September 13, 2021 NO COMMENTS

Recently I got a call from an insurance company sales executives and they tried to sell me an insurance policy which they said had Guaranteed 11% returns.

The policy was Reliance Nippon Life Guaranteed Money Back Plan

I knew that there is surely some catch and they are kind of misselling me, I didn’t know what exactly it was. So I decided to dive deeper and find out more.

After I asked them tough questions, and once they realized that my knowledge about these things is much more than an average uninformed investor, they were ready to mail me from their official email id about what I will get. Finally, I solved the mystery like CID and told them the policy has just a 4.6% return and not 11%.

Do watch the video below to quickly understand the whole game.

So when I got this sales call, a lady told me that this was a 15 yrs plan, for which the premium payment term is just 10 yrs. I will have to pay Rs 1 lac for 10 yrs and I will get a total payment of Rs 24.72 lacs towards the end and the return turns out to be 11% IRR

This sounds quite attractive and anyone who is not happy with the FD returns these days will get attracted quite fast.

When I looked deeper, I found out that few numbers she told me over the phone are visible in the illustration, but the amount of Rs 8,99,147 was missing from the illustration. This was the SUM ASSURED amount.

She had mentioned to me on call that we will get this sum assured amount also, but the illustration had no information about it.

This was the Catch

So when I asked them – “Why is the sum assured not in the payment section?, you told me that I will get that also”

To this one of the seniors told me that it’s not in the illustration, but I will get it because “Sum Assured is always paid in the policy”. I told him that it’s paid when a person dies, but where is it written that I will get the sum assured amount apart from the other numbers he had mentioned” for which he didn’t have a clear answer. 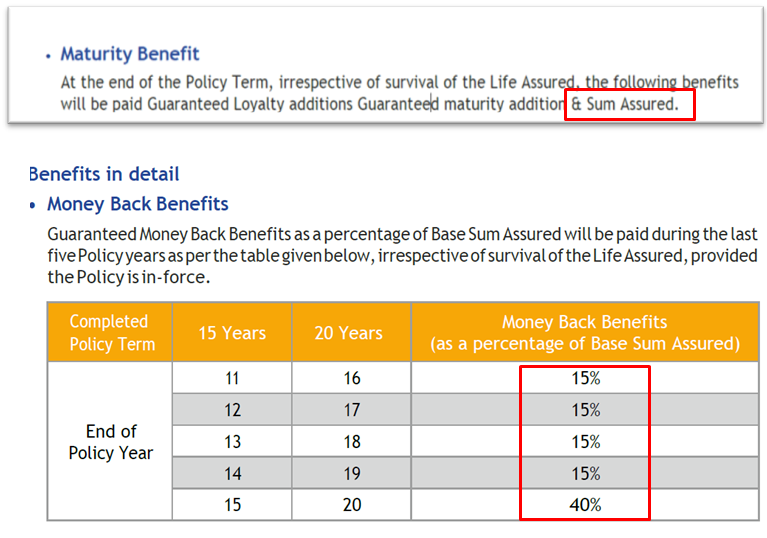 The sum assured is given to you in small parts in year 11th, 12th, 13th, 14th, and finally in 15th year. So it’s already paid to you which you can see in the image below.

However these guys were counting the sum assured again when they told me about the plan over the phone and that’s the reason they tell you that you will get a very big amount, which you will NOT!

They are just counting the same thing twice in the benefit and they are not even lying when they say that they can mail you that you will get “sum assured” in this policy because you are GETTING IT!

Are you getting the whole game? They are just saying the thing in an incomplete way and twisted format.

To properly understand the details, do watch the video above

This was a catch which most of the investors are not able to catch and believe the sales call.

They also don’t find any mistake or bluff and even though they have heard that lots of misselling happen in the insurance sector, they still go with these policies.

When I calculated the IRR of the policy with the correct numbers, the IRR turned out to be just 4.65% rather than the 11% they claimed over the call. 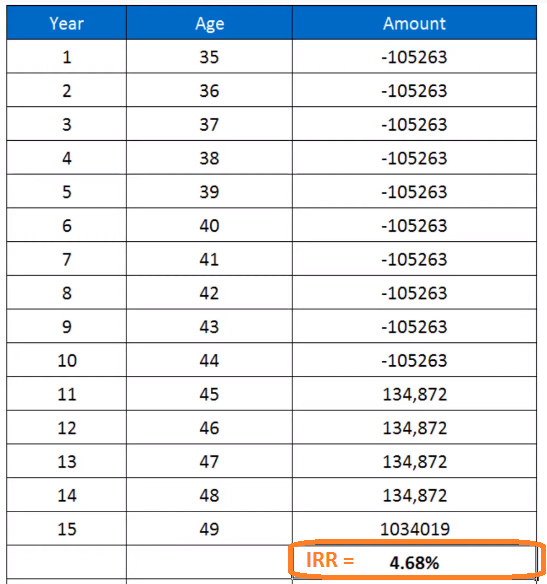 Do not fall for this kind of policies which does not clearly give full information on the returns and is too complicated to understand. They will try to convince you by saying things like they will email you from their official email id because they have learned that people have learned from previous missellings of ULIPS etc where nothing was given in writing and if they say something like that, it will look very trust worthy!

For your insurance needs, take a plain vanilla term plan and for your investments do invest in pure investments products like stocks, PPF, mutual funds, bank FD’s, NPS, etc, and keep things simple.