Did you ever know someone who met with an accident and he was the main bread-winner of the family? Mostly yes. A personal Accident Insurance plan is policies that cover a person from accidental death, accidental disability and several other features. There can be very bad consequences of meeting an accident like death or pause in income, ranging from a few weeks, months to even years.

Ajay was one of the best employees of his company based in Bangalore . He bought a term plan as soon as he realised the important of securing his life. He also bought a health coverage to secure his wealth (not health). He had recently bought a home through loan and he was also investing for his 2 kids future . Ajay was the only one earning in his family which also had his mother as dependent on him.

It was the last working day of the week just before Diwali holidays and he had to rush home early that day. He was as attentive while driving as he was always, but he forgot that accident happens not because you are careless , but because other can be damn careless … While Ajay was taking a u-turn another car slammed into his car which was coming with a lot of speed.

It was a serious accident and what Ajay never imagined happened ! . Both of his hands were non functional after the accident . Being a senior programmer in his company, he knew that his future is lost now . This one incident changed him life. While his income stopped, his expenses at the house, EMI etc had to still continue.

His term plan could not pay him because he was not dead. His health insurance plan covered the expenses for hospitalization, but only covered for a basic amount incase there was a temporary disablement. But Ajay case was not covered in any of his existing insurance policies. At this point in time, if Ajay had a Personal Accident Insurance Policy, it might have helped him a lot.

If you are a reader of this blog. Most probably you must be living in a big city, most probably you are salaried class and obviously you must be travelling from home to office and office to home, you will do it every day, for months and years .. that would be thousands of days. The chances of death or getting hospitalized for some illness is far lower than the chances of meeting an accident these days. So in today’s world more than a Life Insurance and Health Insurance, the first thing which you need is an accidental insurance policy and why not. Its costs so less that one can afford it very easily. You can buy a 10 lacs accidental cover anywhere from Rs 800 to Rs 1,500 per year depending on the company and benefits. But one thing is sure that it’s very cheap.

Think for a moment, what all can happen if one meets an accident, what can happen, what are different kinds of end results of it? An Personal Accident Insurance policy covers almost all of them. Below is a table that gives you an idea of what kind of situations are covered by accidental policies.

What is not included (Exclusions)

Accidental policies do not cover Deaths or disablement because of

Premiums do not dependent on AGE

The premium of accidental policy does not depend on age. So if you are 25 yrs old or 50 yrs old, the premiums would be the same, rather it would depend on your working conditions and the nature of your job. If you are a software engineer working in Bangalore, then your chances of meeting the accident are different from an army personal working in the border or a worker in a factory that has dangerous machinery. So each kind of job profiles are divided into different risk level, sometimes it’s 1,2,3 and sometimes it’s just 1,2. Risk level 1 are those who are less risky and their premiums are lower and risk level 2 are high risky category and their premiums are higher. Let me give you an example

Note that some companies have a list as 3 different risk levels – 1,2,3

Examples of some good accidental policies

Below I am listing down some of the accidental insurance policies and their different features. If you see all of them, you will realize that all the policies have something good or bad in them. This chart is made by collecting information from different portals and companies’ websites. Note that the premiums below are for Low-risk professions (Level 1) 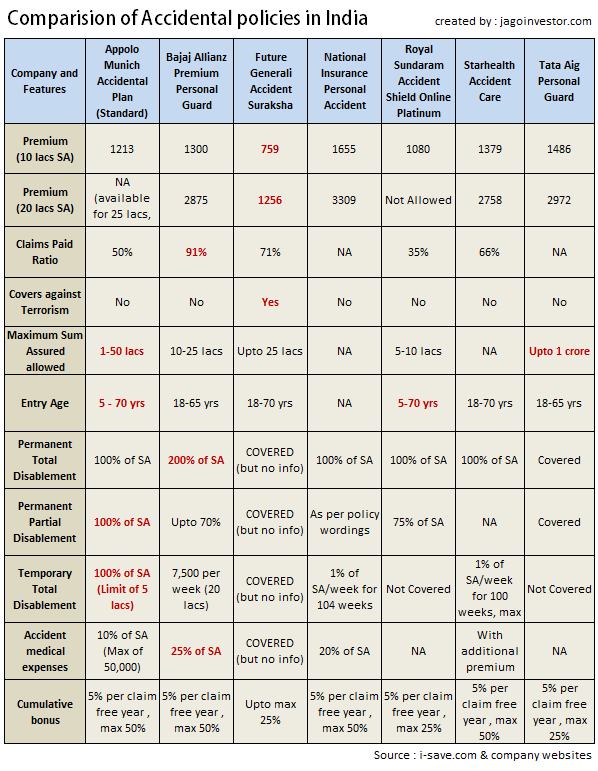 If you see the above table, you can see that on absolute level Bajaj Allianz seems to be the best option and it’s the recommended one. The best part is that the claim settlement ratio is high and that’s the biggest parameter people look for.

Please comment on what do you feel about Personal Accident Insurance policies and what has been your experience in that?