Claiming Assets after Death ? Here are 4 Important documents you need to know about !

Are you sure that when you inherit your parents assets or any other bank accounts later in life, its going to be a smooth process? Will it be hassle free and without any complexities? Are you sure you will not get dragged into life long legal battles with siblings or any other relatives who will fight for the same assets and properties ? Have your parents taken care of all the succession planning like nominating you for those assets and writing a WILL and registering it with help of a lawyer ? 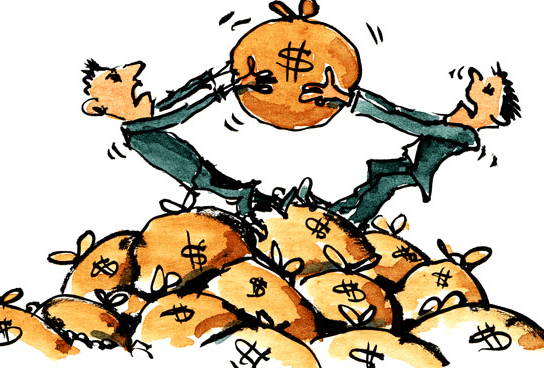 On an average, almost all the families are very weak in their estate planning. They are so much engrossed into their “current” life, that they are not bothered about future much. Its their children and legal heirs who have to suffer later, due to their laziness or ignorance about these matters. In this article I want to highlight few important documents and processes which you should be aware about, so that when the time comes – you are familiar with them.

After the death of the owner of assets ?

After the death of asset holder, after few weeks/months – its time to claim their assets and properties. That time, there are lots of paperwork and procedure to be followed. You have to claim their

You will have to run around to claim all of these one by one and might also have to do few rounds because of the process and procedures to be followed. Now this verification and processes is very critical for the banks, mutual funds houses, or companies to make sure that the asset is passed to the right hand, who ever is entitled to get it legally and not just anyone making the claim.

Just saying that “I was his Brother” or “I was his wife” will not help much because its not so straight forward process, especially if things dont match on nomination or the WILL. And if the nomination is blank or not on the right person name (who is wanting to file a claim) or worst if WILL is not written at all, then its the start of that frustrating phase, which is about to come. In your world, you might be very clear, who are legal heirs and who deserves the assets, but that’s not the point here. You need proof and all the legal documents and process in place to claim the assets.

So there will be documents asked, forms to be filled and rounds to be made to court to obtain some documents – even if it means frustration and disappointment for the family member of deceased. So you can now get a sense of how important is succession planning, and if one is careful and responsible enough, they will at least do basic things in place like  putting nominations in place and writing and registering a WILL in a standard manner with help from a lawyer.

Some mistakes which most of the investors make

Let me first list down few mistakes or incomplete things done by investors which create the problems in future. These mistakes happen due to sheer ignorance or because of casual attitude of investors. You or your parents might be doing these following mistakes.

Can you relate to any of these above ?

Are you doing something similar in your financial life. It answer is “YES”, your family or you yourself might face lot of issues in future as explained above. You seem to be too much busy in earning money or just making investment – without realising that one day it might not even go to someone important in your family or reach very later after a lot of work to be done.

4 Important Documents required to Claim an Asset after death

Lets finally come to the main point and now I will just explain to you some documents which generally come into picture at the time of claiming assets. Here they are – 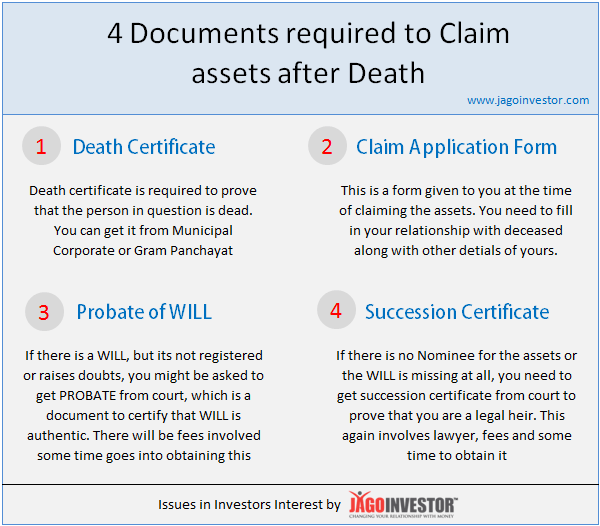 The first thing in the list is Death Certificate. Its one of those documents which will surely be required no matter what. Death certificate is a document which officially certifies that a person is dead . Death certificate also records the date and time of death, which can be a crucial information for things like life insurance claim.

Anyways, as per Registration of Births & Deaths Act, 1969, its mandatory to register death within 21 days of its occurrence and if you are late, then again you will have to do more paperwork and pay some charges. Death Certificate is issued by Municipal Corporation (Urban areas) or Gram Panchayat (in case of rural areas) after proper verification is completed by them.

Death certificate is required by all the institutions (Banks/Fund Houses/Insurance Companies) irrespective of presence of WILL or nominations. So make sure you take death certificate immediately after the demise of the concerned person. Depending on the nature of death, the process of obtaining death certificate changes. If its death at home due to some illness or high age, there not much is required, but if its a death by accident or murder etc, a copy of FIR might also be required.

So make sure you get this document after the death, it might take some good amount of time and running around , so start the process sooner you can.

TIP – You can find state wise procedure and which department to contact on this website. Visit the website and you will see a dropdown at the end of the page.

Claim form is the form which needs to be filled by you at the time of making the claim. Depending on the asset type, the organisation will provide you. Each bank has its own claim application form, Post Office has its own and mutual funds companies have their own forms. You have to fill in details like – relationship with the deceased and your identity details along with proofs and more.

You also have to give your bank details or other KYC details if the assets has to be transferred to your account like in case of shares in demat account or mutual funds portfolio. Just to give you a feeling of how it looks like  below is a sample claim application form for saving bank account from SBI Bank.

One of the most common problems in India is unregistered WILL. Lots of people write a WILL without consulting a lawyer, and do not feel the need to register it. Just because its not registered in the registrar’s office, its bound to raise questions on its authenticity. Lots of times in families, someone claims that there was a WILL written in their favour and then the other parties challenge it saying that its fake. Sometimes two parties come up with their own version of WILL claiming that the other one is fake!.

This all happens because the WILL was not registered. In which case, a “Probate of WILL” is required from Court.

Probate is a way to certify that the WILL is authentic. So if you have to claim an asset and the WILL you have raises questions, you might be asked to get Probate from court to prove that the WILL is authentic.In that case you will have to reach to court, catch a lawyer and apply for Probate. There will be fees to be paid and lots of time might go in this process. Probate will have court seal on it and also the WILL copy will be attached to it.

Below is one comment which I had got long back on a issue which involved fake WILL. You might be able to see the role of Probate here.

My father in law has died without WILL, he left wife, 2 sons and 1 daughter. Both son prepared ZABARDASTI WILL of my mother in law , stating that both sons will get 40 % each & sister will get 20%. This flat is owned by father in law. Can widow’s (mother in laws) WILL will be considered after her death ? Now daughter wants equal share in her fathers property. Is this property is earned or ancestral for mother in law, can daughter give challenge for equal share after her mothers death, or this REGISTERED WILL prepared by mothers will be considered by cour ? plz advice in brief

You can see that the above WILL can be challenged and in that case, a Probate would be asked for to prove that the WILL is authentic or not.

To get succession certificate, you can reach to district or high court of the jurisdiction, under which the assets fall (bank or property location) . You have to take help of a lawyer and file a petition for obtaining succession certificate and give details like your relationship with the deceased, you date of birth, your other details asked.

Then court will put a notice in newspapers inviting any objections for next few weeks, and if there are no objection, then you are granted the succession certificate. This can take time, money and some rounds to court along with anxiety especially when there is someone else who claims to be the legal heir and you do not have good terms with the other party 🙂 .

So this was all for now.

The more work you do on your succession planning part. The lower will be the headache and frustration for your family members later when you leave this world as a surprise. The minimum you can do is fix your nominations for all the assets like bank accounts, life insurance policies, mutual funds, demat account, PPF / EPF and real estate etc. Sir, it takes 1 day! of your life or some hours only. Apart from that, you should write a WILL and get it registered too with help of a good lawyer, spend on it 🙂 .

71 replies on this article “Claiming Assets after Death ? Here are 4 Important documents you need to know about !”