Withdrawal from EPF accounts with help of Fake Bank details and Corruption !

Every month when you get your salary, a big chunk of that money is transferred to your EPF (Employee Provident Fund) account. Over the years, you would have accumulated significant sums of money in your EPF account and would be feeling excited at the prospect of earning good interest on those sums.

However, your EPF money is at stake. Most investors believe that the EPF (Employee Provident Fund) is nothing but a ‘bubble’ waiting to burst and when it does, it will engulf the whole country and adversely impact millions of investors.

Image Source – Livemint
I am going to share some startling facts today about EPF Frauds that have recently come to light and have been written about and highlighted in the press. And it is highly likely that some of you who are reading this article might be victims of this fraud – just that you are unaware about the fact at the moment.

Sanjay Kumar is the Chief Vigilance Officer at EPFO and on 7th Oct, 2013, a circular was issued to all the EPFO establishments of all regions in the country with the subject- “Fraudulent withdrawal from the account of EPFO by furnished forged statutory returns”.

The letter talked about scammers making fraudulent withdrawals from various EPF accounts by submitting forged bank accounts and KYC details/documents. It also mentioned that EPF officials had colluded with these scammers and helped them withdraw money from Provident Fund accounts – especially ones which were inoperative (no activity on those accounts) and/or where the employer no longer existed (closed or shutdown).

I have paraphrased below important excerpts from the circular

Point 2. The investigation has revealed that the fraud was committed mainly in respect of those establishments where remittances had not been received for many years, records not updated and the establishment had not submitted statutory returns. Further no pre-coverage or post-coverage inspections were carried out of the firms and no claims were received or settled since long,” it said.

Point 3. The investigation has revealed that the fraudsters had submitted forged/fabricated returns viz . Form 3A/6A, 9(R), Specimen Signature Cards and therefore, Submitted fictitious claims in the name of original members of non-members. The claims were settled by putting pressure on dealing hands/office by all possible means.

Below is the full circular issued by EPFO on the fraud

You might be aware of multiple cases where investors face a slew of obstacles while withdrawing their Employee Provident Fund money. At times, it takes years before they get any status of their EPF money and even when a payout is made, cheques go missing or are sent to the wrong address. So, it doesn’t require much imagination to see how in the wrong hands the cheques can be cashed simply by opening a fake bank account.

Here is an incident where an EPF investor faced the issue

Preliminary investigations revealed that there had been huge withdrawals and transfers of money from the individual fund accounts of a number of school employees without their consent and knowledge,” they added. “An FIR was registered and investigations were initiated by a special investigation team. During the investigation, it came to light that funds were withdrawn by the treasurer of the school by forging signatures of the principal and staff members,” police said.  (Source)

To put things in context, we are not talking about a few isolated fraud cases or few crore rupees here. The actual scale of the fraud is mind boggling and will cause you sleepless nights.

Consider this – as on April 2011, there were close to 8.15 crore EPF accounts, out of which 3.14 crores EPF accounts were dormant with a balance of close to to 16,000 crore rupees. Of these 3.14 crore dormant accounts, 2.5 crore accounts had a negative balance, which meant that they did not have any money in it (money had been totally withdrawn!). 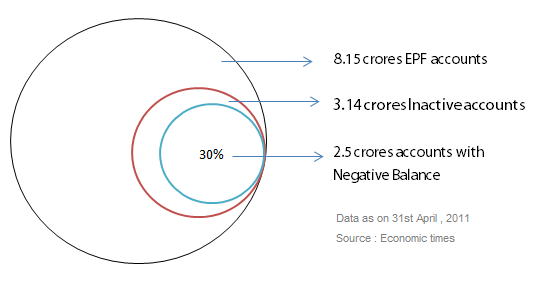 Lets talk about the modus operandi of the fraudsters in detail, so that you can understand the loopholes in the EPFO system. Note that this whole fraud is highlighted mainly for dormant accounts, especially those where the employer does not exist now. However it would not surprise me if frauds started to happen even on active accounts anytime soon.

So here are the steps that are taken by fraudsters

The first step is to find out all the details of the dormant EPF account. If you have some money to spend on bribes or lots of time and patience to search the Internet, you can get all the information you want. The Internet abounds with people who have given their EPF numbers, name and address without realizing the risk they are exposing themselves to. Also if you have the money, you can quite easily bribe officials and get information. A dormant EPF account is one that does not get any fresh contributions for 36 months. At times the employer depositing the money in the EPF account closes operations and now the EPF account is totally orphaned and the money is sitting idle. The EPF holder is either in another job waiting for that perfect moment when he will start the withdrawal or transfer process or he is working outside India and has totally forgotten to take action on his EPF account. It may also be that the money the EPF account is such a trivial amount that he/she does not bother to do much about it.

The fraudster’s next step is to open a bank account with forged details, and prepare PAN card, address proof etc. In an environment, where obtaining fake passports or completely forged educational degrees is child’s play, it’s no stretch to assume that it would be easy to get fake KYC documents made.

Step 3 – Apply for Withdrawal of Claims with forged identity

After all the documents and identity are set, one just has to fill up withdrawal claim while posing as the target of the intended fraud. If the company depositing the money in EPF account is now non-existent, then EPFO relies on the bank branch to confirm the authenticity of the bank account (as per Livemint article) .

In any event, the structure of EPFO is not centralized i.e. each state has its own EPFO department and things are controlled locally. Therefore there are different EPF account numbers for the same person and different EPF accounts opened at different intervals. Even the process followed at each step is not extraordinary but rather the same old rotten way of doing things.

If there are issues at some stage, it has been found that insiders have been influenced and helped to pass the claims (as per the EPFO circular itself). There is no wonder that bribes are given and taken and things are bent. Here is proof below

The RTI reply also revealed that at least 1,350 EPFO employees have had corruption charges against them in the past five years. Of this, 450 are from the officer grade. Most of these officers have been accused of misusing power and colluding with companies to turn a blind eye to their wrongdoings. And every year, more and more such officers are coming under the scanner.

Confirming the trend, DL Sachdeva, a member of the EPFO board, said it would be next to impossible for any company to siphon off money without the help of EPFO officials. (Source)

What you should do now ?

If you have any old EPF account that needs attention, you should ensure you withdraw the money or transfer it to your current EPF account. Make certain that you only have one single active EPF account running. Do not leave it unattended for extended periods or else be ready to face unpleasant surprises in the future. If you need any information or need to move things forward, use RTI application to EPFO department and things will move quickly. Also make sure you take general precautions like not revealing your EPF number and other details in public without a strong reason.

Please share your views on this topic and EPFO in general in comments section below ?

32 replies on this article “Withdrawal from EPF accounts with help of Fake Bank details and Corruption !”