55% of Software professionals in India, dont own a house [Survey Results]

Recently I ran a very large survey which was taken by around 10,917 participants. Out of those 4,940 people were from the IT Industry. I had asked many questions related to real estate ownership like how big houses they own If its bought with a home loan or not and if they don’t have a house, what kind of rents are they paying apart from many other questions.

Click Here to Share this on your Facebook profile
So what did I find in this survey? I found out that out of 4940 software professionals who took the survey, 2706 of them said that they don’t own any house or real estate property. That around 55%.

I know this is not a finding. Almost everyone buys a house on loan only because very few people can pay the full amount on their own and this gets confirmed by this survey. Around 81% IT professionals said that they took home loan for buying the house, however 10% people got the house in inheritance and only 9% people paid the full money out of their pocket, which I think is a good number.

90% of the house owners (IT professionals only) own either 1 house or maximum two house. Only 10% house-owners have more than 2 properties.

Out of 100 software engineers who dont own a house, 36 work in Bangalore

If we look at the top 6 cities which are into software jobs creation, we found out that the higher the cities reputation into IT Industry, higher is the number of non-home owners % wise.

Who is responsible for the high real estate prices in big cities?

In this article, I want to understand what you all think about high real estate prices? What is the reason behind it? Can we say that to some extent (if not fully), the IT professionals contribute to the real estate prices increase?

I know not all software professional earn very high salaries, but in all the big cities, there is a section of IT class which earns a very handsome salary and they suddenly use it to take home loan and buy a house either for consumption or for investment purpose.

This is true for many other Industries as well, but do you think IT sector contributes much more than other industries? I do not want to make any judgment here, but I want to hear from IT professionals who read this blog about what they think about this? 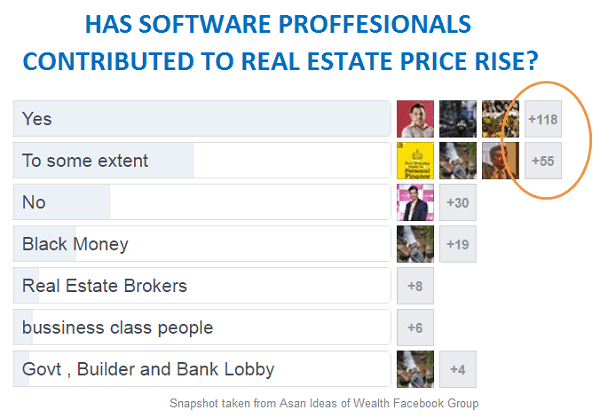 Some people told me that we can’t blame software professionals for high prices in real estate, which I agree. No one can blame anyone, but I wanted to know what thousands of people from IT background and non-IT background think? What is the perception?

So I separated non-IT and IT people from the survey and I asked them the same question and looks like people from IT industry are of stronger opinion that real estate prices are high because of IT industry. While 39% people from non-IT background said clear “NO”, only 28% people from IT background denied that IT industry has contributed to rise in property prices. Below are the results of survey by around 10,917 participants out of which 45% are IT professionals themselves. 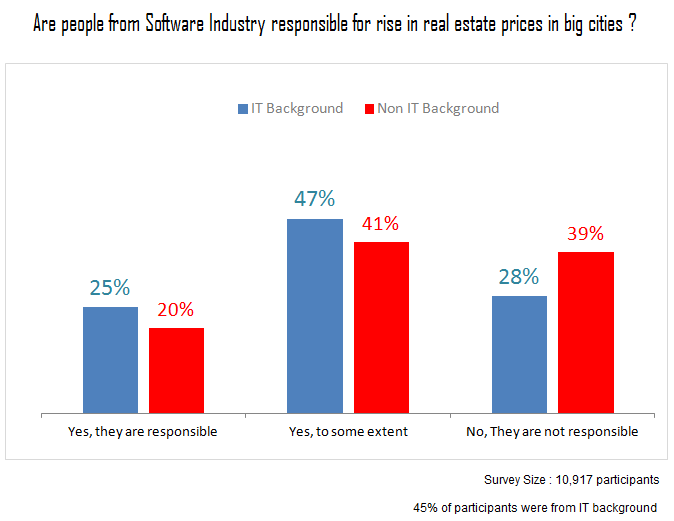 What people have to say about this?

Let’s hear some people who have shared their views about this topic and how they feel that IT industry is somewhat responsible for high real estate prices. 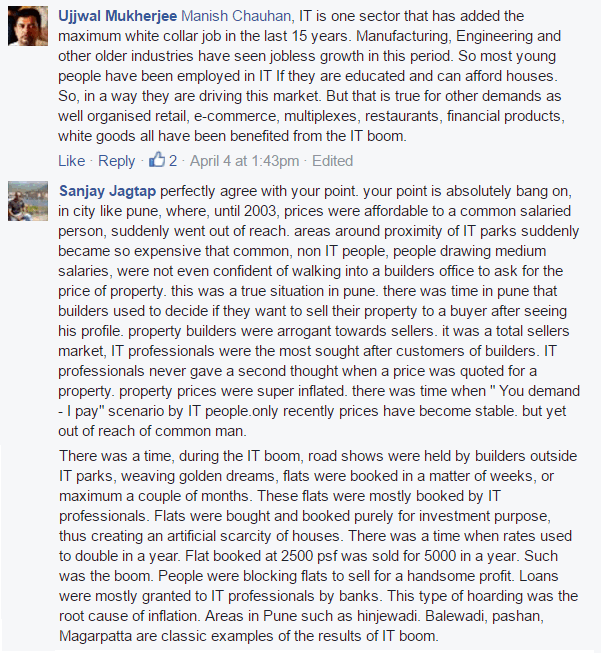 But 55% of Software professionals still don’t own a home

At the same time, we have a big number of software professionals who cannot afford a house because they don’t belong to that very high earning class. Software industry like every other Industry has its own issues. A big percentage does not earn very high salaries and that is confirmed by the survey also.

Salaries in IT industry is highly skewed

Only 12% of IT professionals who were surveyed, are earning more than 20 lacs per annum where as 57% of the participants are earning below 10 lacs. Now that’s just 80,000 per month and I am sure, if one is living in a city like Bangalore, Pune or Hyderabad, it will not be considered as a very high income because given the expenses these days, people at that salaries would hardly be saving anything significant.

As per a website payscale, which has an extensive database of various jobs related information like the skills needed, salaries etc. The average Salary of an experienced Software Engineer in India is close to 13 lacs (with experience of more than 10 yrs) . Note that this is an average number 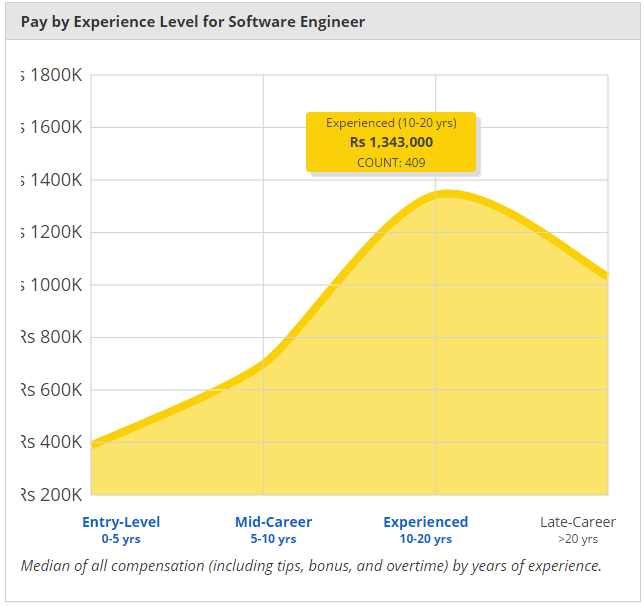 I analyzed the results of 10,917 people who took the survey and found out that if you look at the percentage home ownership industry wise, then software industry is not at all at the top. Infact, it’s quite below average. But then we are talking of only big cities (top 10 cities of India). On top of it, IT Industry has somewhat slowed down in last 5 yrs and its not at its peak now. You can read this long thread on IndianRealEstateForum where people discuss about the impact of IT slowdown on the real estate market.

So basically we are trying to see that out of 100 people who belong to XYZ Domain, what percentage of them owns a house. Domain here means Software, Medical, Govt Job, Business, Marketing, Sales, Engineering * Finance. There are many other domains, but we are not considering them, because there was not enough data. For each of the above domains, we had at least 200 data points each and at times more than 500 or 1000. Here are the results. 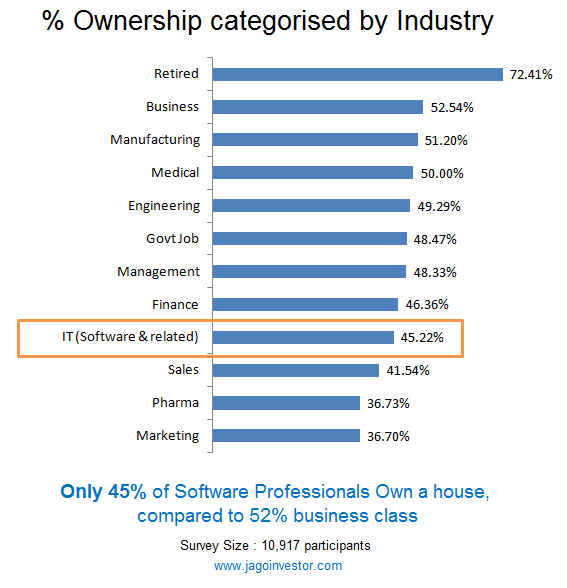 IT Industry ownership stands at 45% and we can be kind of very assured of that because that comes form 4940 people data, which is quite huge.

Also, note that the lowest home ownership is among Sales and Marketing Professionals & Even Pharma, I don’t have much interpretation for that, but may be it’s because they might have a big variable component in their salary and that might be a deterrent in their home buying. If you have insight on this, please put them in comments section.

We want to know from you, what is your views on increasing real estate prices in most of the Indian cities and do you see IT industry contribution to it? Please share what you think in comments section.

51 replies on this article “55% of Software professionals in India, dont own a house [Survey Results]”