This is a guest post by a reader Prithvi, who wanted to share his views on the redemption charges by ICICI bank on the payback points. Here goes the article which was sent by Prithvi to me over email. We would like to have a discussion on this topic and see what everyone else has to say about this.

This is Prithvi. I wanted to share few thoughts I have about the ICICI bank and its redemption charges on usage of Payback points.

ICICI Bank is probably the best private sector bank in this country, it is because of them that the banking scene in this country has progressed so much.

PAYBACK is probably the best loyalty program in India, before PAYBACK, people never even thought that reward points meant anything and PAYBACK was the reason that this changed in India.

Now, there is one thing that this bank is doing that is not ethical. ICICI Bank is looting its account holders with the name of PAYBACK.

PAYBACK is a loyalty reward program with ties to several major brands in the country. You can earn PAYBACK points when you shop online or offline with many outlets, Future group outlets are one of them, Brand Factory, Pantaloons, Home Town, Central. Online you can earn and spend PAYBACK points at eBay.in, MakeMyTrip.com etc, to name a few. You can also earn PAYBACK points with your ICICI Bank Debit/Credit Cards and also ICICI Internet Banking. Note that PAYBACK and ICICI Bank are different entities

American Express also offers a card with which you can earn PAYBACK points.

Now, what’s unethical here? Let’s look at how you can earn and spend points.

Now, there are 2 categories here

Here is the problem.

ICICI says that they have a right to charge for redemptions because they have a tie-up with PAYBACK.

Now let’s look at a scenario where it gets a little complicated, if you have a PAYBACK card from Brand Factory and you also have an ICICI Bank account and both of them are linked, this is when ICICI begins to loot you.

If you earn points at Brand Factory, the points get credited to your PAYBACK account and now when you spend those PAYBACK points, ICICI charges you a redemption fee. 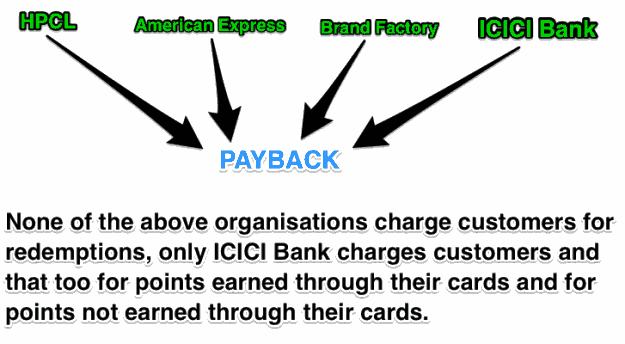 This is blatant robbery. ICICI has no right to charge PAYBACK users for redemptions. Please listen to this audio which was created by me to explain my views on this topic.

ICICI Bank says that it has the right to charge users for PAYBACK redemptions when contacted by email.

PAYBACK confirms that it DOES NOT charge its users for redemption.

106 replies on this article “Why is ICICI bank charging redemption fees on Payback points usage?”