There is a good news to taxpayers. CBDT recently announced that taxpayers who filed their income tax returns online will no longer have to send the ITR-V paper acknowledgement by post to CPC Bangalore, if they have aadhar card which can be used for verification purpose.

Instead of manual verification, a new Electronic Verification Code has been introduced to verify the e-returns. For that one will have to mention their aadhar card number in ITR form, and tax-payer will get an OTP number on their mobile for verification, which needs to be completed on the website of tax filing.

Below is a snapshot of the new ITR form where aadhar card number is asked in case you have it. 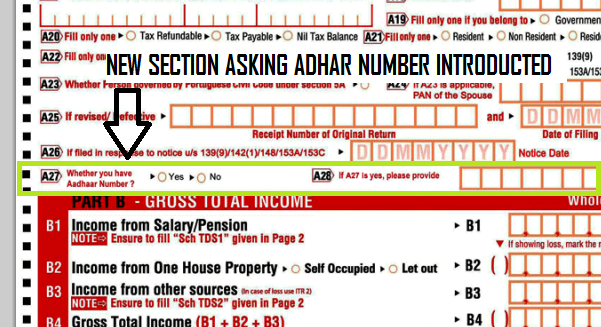 Issues with the old system

Earlier the process was like this. Once you e-filed your tax returns, you then had to send the acknowledgement copy within 120 days to CPC Bangalore. Only those who had signatures could do verification online, but it was very rare, hence millions of tax-payers had to take the pain of manually sending the form.

However, the old system was not robust and a big number of people used to get messages that their acknowledgement has not reached tax department and other manual errors used to happen.

With the introduction of this new system, things will be simplified and even faster. Now the process will be as simple as filing the tax returns online and they will get a one time password for verification purpose on the registered mobile number, which has to be used for verification on the website of tax department. That would complete the process of verification.

But I don’t have Aadhaar Card ?

Don’t worry. You can always send the physical documents ITV-V to CPC, Bangalore like you did earlier. You can do that even if you have aadhar card. This new system of verification is just an alternative way for those who have aadhar card.

What do you think about this new system?

Write us your opinion on this in our comment section.