Dont get fooled by High CTC offered by your employer

It was campus placement month, and although everyone declared that they wanted to do quality work once they were placed, they also harbored a secret desire to get placed at the highest salary. When we used to look at our pocket money and compare it with the salary “package” offered by companies, we used to feel we would sleep on bundles of notes.

The top students of my batch were placed at extremely high pay packages, and they were proud to have “cracked” it. However the average students and other not so lucky ones had to settle for lower pay packages.

The “Very Happy” and “Only Happy” students left for the next phase of their life. The bitter truth however, only emerged after a year or two – that the take home salary of most of the students was not that different from the rest. While the students who got high packages were obviously earning more than the others, the difference was only marginal.

The CTC (Cost To Company) numbers had fooled us! 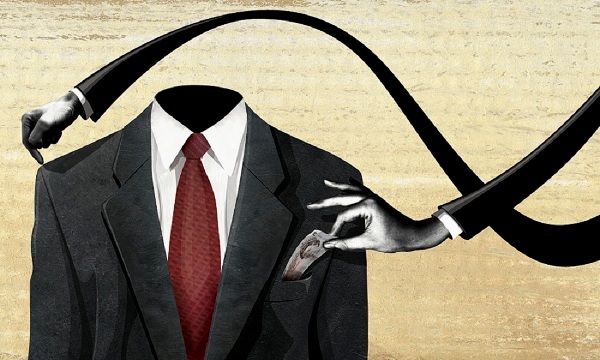 What is CTC (Cost to Company)

What was happening was that the companies were exploiting our human craving for “Instant Gratification”. Job Seekers want big salary numbers – its’ a benchmark which they use to compare themselves with others. It feels nice to say, ”my package is 12 lakhs per annum”, even if you only get 58,000 per month in hand.

CTC or cost to company is what a company spends on you. If something is an “Expense” for a company because of you, its part of your CTC, as simple as that. So starting from the air conditioning you use at office, to the food you eat at office, everything can be part of CTC. Here is one how one of our readers Nandan feels

I fell for a similar trap while joining an IT MNC recently (from another which was equally good at inflating its VP compoment). It’s been only 3 months now since I joined this company and the worst part is that the take home I get now is almost same as that I was getting in my earlier company (though on paper the CTC is having 35% hike over the previous company CTC) – Link

There are several ways companies can inflate the CTC Numbers and give you an impression that you are getting the best deal, only for you to realize later that the other job was better. Let me now show you some ways companies increase the CTC numbers.

Trick 1 – Including their EPF share inside the CTC itself

The first time I saw my salary slip, I was somewhat shocked to see that my employer was deducting the ‘employer’s share’ of EPF from my salary. I was wondering – “If it’s the employer’s share – why are they deducting it from my salary?” It was only later that I realized that this was merely a simple trick to inflate the CTC. They could have just reduced my CTC by an amount equal to employer share of EPF and could have paid it separately, but then my CTC would be lower– even though I would have been getting the same salary at the end of the day.

When I joined my first job (and the last one), I was very pleased to hear my CTC; it was amongst the highest packages on campus. But then my salary in hand correlated poorly with the CTC figure. In my mind, I had divided my CTC by 12 on the day of placement and was on the top of world. Though what happened in reality was that I was supposed to get a one time joining bonus (that too after many months), and that figure was added to the final CTC – inflating the number substantially. It was only for first year, not a regular thing !

Another simple trick employers play is to add your Stock Options to your CTC. Stock Options again are not a regular payment source, however they do increase the CTC considerably. You can learn about stock options, RSU’s and ESPP here in this article.

At the end of every month, we used to get food coupons from our company. We also had payments made by the company towards yearly life insurance and medical insurance. The thing is, you do not get these things as CASH, but instead as benefits. However, the company adds all these to your CTC figure, as it is paying for it.

Another famous trick played by companies (especially those in sectors that are performance based) is to add a considerable amount of variable component to the salary and keep the fixed part small. The CTC number is then provided based on an average performance assumption. For example if your CTC was Rupees 10 lakhs, it could happen that 4 lakhs of the CTC would be FIXED and the remaining 6 lakhs would be variable. The part of the variable component ultimately paid to you could go down or up depending on your performance or some parameter that supposedly would be under your control. It could be sales, the number of clients you bring in etc. etc.

In my limited experience, pay packages offered by startups or smaller companies are more or less transparent, and artificial increases in CTC are limited. Dividing the CTC figure offered by them into a monthly number will get you very near to your take home salary – though it will obviously be lower. However, in the case of larger companies, the CTC number is inordinately inflated and your eventual take home salary might give you the feeling – “Seems like there is some mistake in the calculation”.

Joining other company for higher Salary ?

In the image below you can see how a job with low CTC can lead to a higher take home salary – all because the package with the higher CTC was inflated by injecting various components. 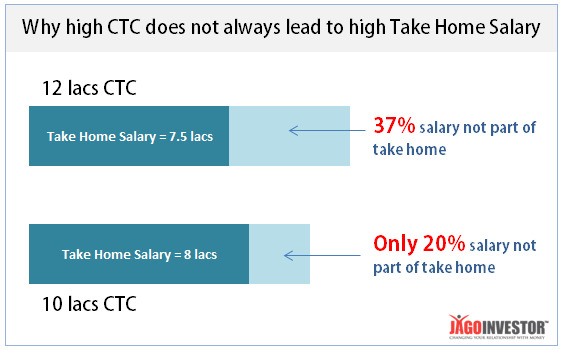 I hope from now on, you will focus more on the final take home and not be fooled by CTC numbers.