How long will you live after retirement? (Its not 80 yrs)

That’s what most of the investors answer when they are asked – “How long are you going to live?” 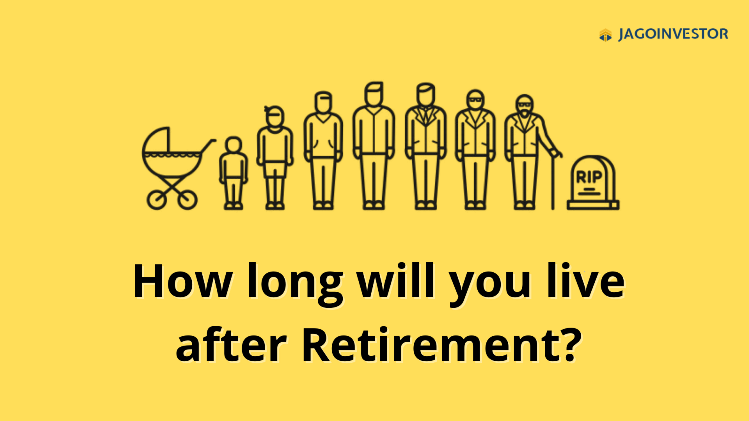 In most of our workshops and even the online webinars, when we asking this question “How long should you plan your retirement?” . The standard reply is 75-80 yrs. Only 2-3 people among the ground of 40 will murmur a number like 95 yrs. or something like that and obviously face the horror from of those who are confident of not retiring with enough corpus.

Your answer to “How long will you live after retirement?” will also vary depending on how happy are you with life overall currently. If you are stuck in your job, where you feel frustrated and also have not been able to reach some milestones in life, your answer will show the pessimism and you might say “75 yrs” is enough for me”

However if you are full of life, very happy right now, in a great health and have been doing great in your financial life, you might say “I would love to live till 90 or 95, Life is so beautiful”

But, Most investors get it wrong

Coming to the main question we are trying to answer today, we want to investigate or rather get enough clues on how long we can expect to live in retirement. Finding a good enough answer is critical for every one of us, because then we can design our life, priorities and investment plan for retirement based on the answer we get today.

I want to convince you today, that if you feel that you will just live till 75-80 yrs. only, then maybe you need to change the way you look at it. May be you are planning is wrong. May be you are taking the best case.

The biggest retirement worry most of the people (who are already retired) is “Outliving their money”. Just think of a situation where a person has planned for just 20 yrs. of retirement (retired at 60 and expects to die at 80), but he has already reached 78 yrs. of age and his money is almost finished.

What kind of mental trauma he/she has to go through?

We all want to make sure that it does not happen to us.

We all want to make sure that in our retirement life, we have enough money, freedom to withdraw enough money for our expenses and have a decent margin in case anything goes wrong, so that you don’t have to depend too much financially on others.

Recently we did retirement planning for a 54 yr old person who was an NRI reader and while we created his plan, we made sure that all these elements like legacy, tax optimization, risk-control and growth was taken care while creating his retirement plan and his action strategy. You also have to make sure that if you are almost going to retire or if your parents are about to retire (or already retired) these elements are present in their retirement portfolio. 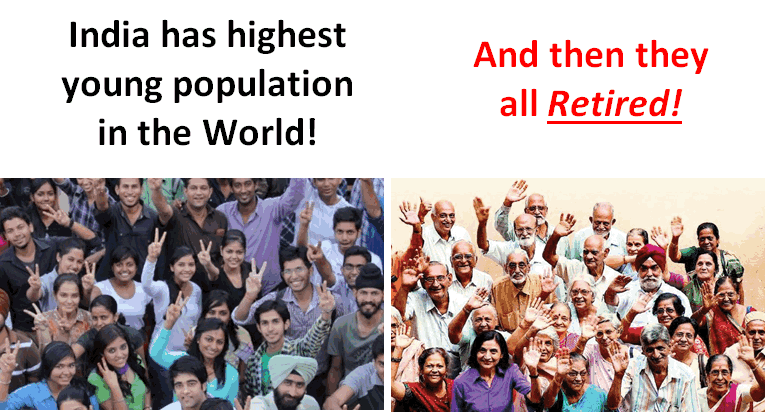 While we are happy today that India is the youngest country in the world, we also have to remember that in few decades, all we young people will also retire. Many of us may also not have the privilege to live with our children which many senior citizens enjoy. So we need to plan better.

Let’s start with the basic question – “What is the average life expectancy in India right now in 2020?”

The official answer is around 69.73 in India at birth. For simplicity sake we will take life expectancy as 70 yrs. The life expectancy in India is continuously increasing every year from last many decades (a lot of people have this myth that it’s decreasing) 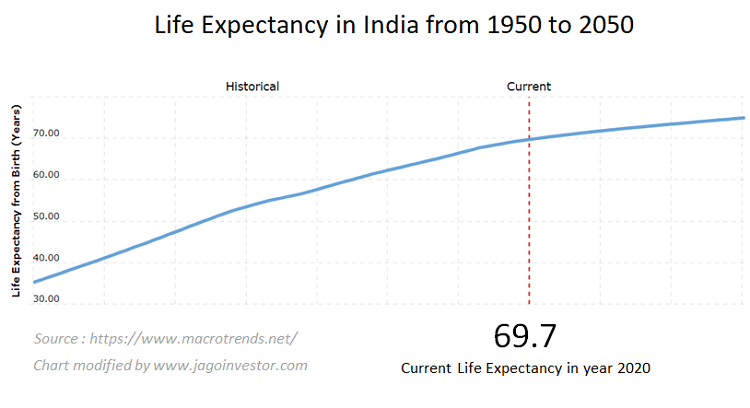 So, you now understand that “average” is kind of a fraud number. It gives some idea to you about something, but does not reveal enough to take decision. We also have to look at standard deviation to get a better sense. And people age at death can vary by a big margin.

A big population dies below life expectancy of 70 yrs. and many die above 70 yrs. The average is 70 yrs. Which means that for every person who dies much before 70 yrs. , there is another person who is living till 100 to average it out

You can’t take these 70 yrs. as the base to plan your retirement life.

A better data to look at is moving life expectancy number, which gives you an idea of what is the expected life expectancy once a person has reached an age. A person who has already reached 60 yrs. of age, won’t have the life expectancy of 70 yrs., it will be much more than that.

And here are the official numbers 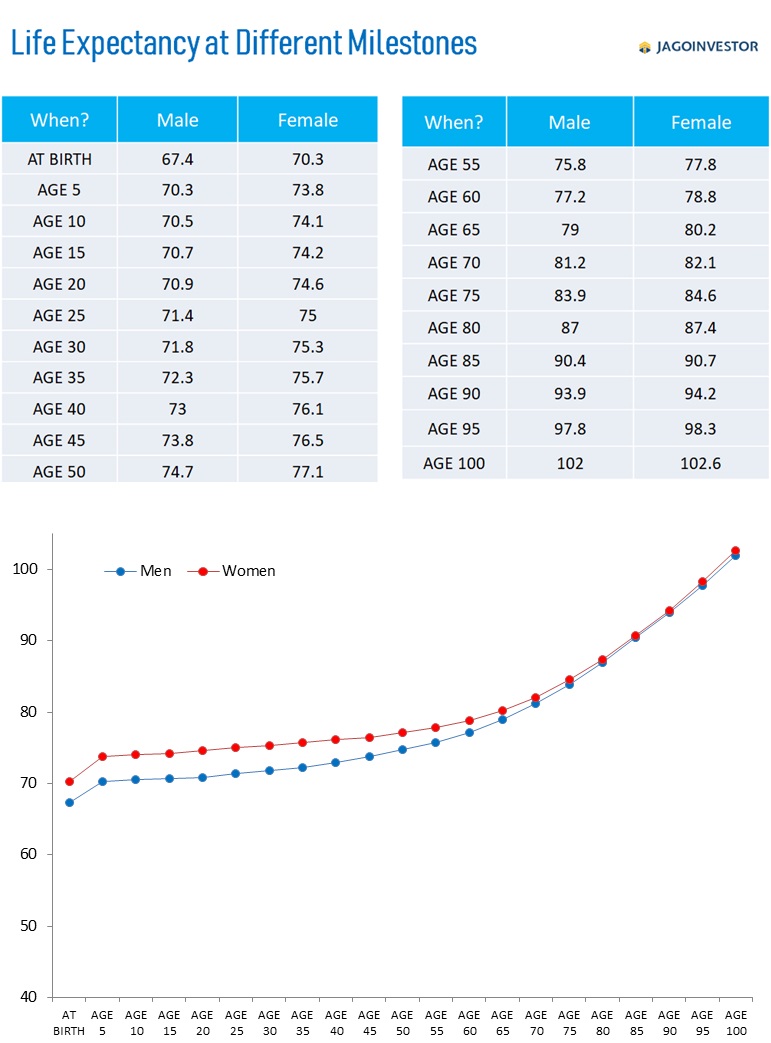 So to conclude, a person who reached 60 yrs. of age as per above data can expect to live till 77-78 yrs. (another 17-18 yrs.) and this again is the average. This includes an unhealthy, broke retired person and a healthy, happy and wealthy retired person also. One of them will mostly die before 77 and another one will live longer than that.

You probably will belong to the other side and you know where this whole conversation is going.

Let’s change the track a bit. I want to now talk a bit about Men and Women life expectancy.

Another thing you should know is that women in general live longer than men all over the world. In India also its true, and its truer for couples. You will often see men dying before their wives for simple reason that men generally have higher age compared to women, and men are exposed to more risks like accidents etc. because men mostly drive, get involved into those tasks which often have danger of life. 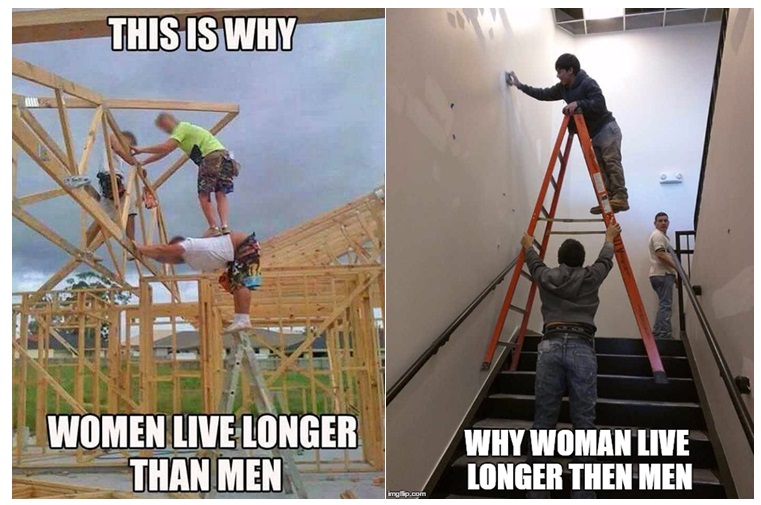 There are many other evolutionary and behavioural reasons, but it’s out of scope of this article.

So if you are women reading this, you need to understand that you will live much longer and have to plan for your pension. If you are men, you need to understand that while you may not believe that you will live longer, it’s your spouse who will outlive you and you have to do your planning more carefully for her as she may live for another 5-10 yrs. after you on average.

The following memes can give you a small hint (in a funny way) of what we are talking about.

Medical Advancements will contribute to your longer life

Decades ago, people died because of illnesses and diseases/inflections which look very normal today. The medicine and vaccines are available today which were not available few years/decades back (in future people will also talk like this for coronavirus).

Then over time various discoveries and inventions were done in the field of medical science and medicines, vaccines and treatments were available for masses at lower costs. This makes sure that the mortality rate comes down over time.

Even the other types of mortality rates are coming down from last many years. 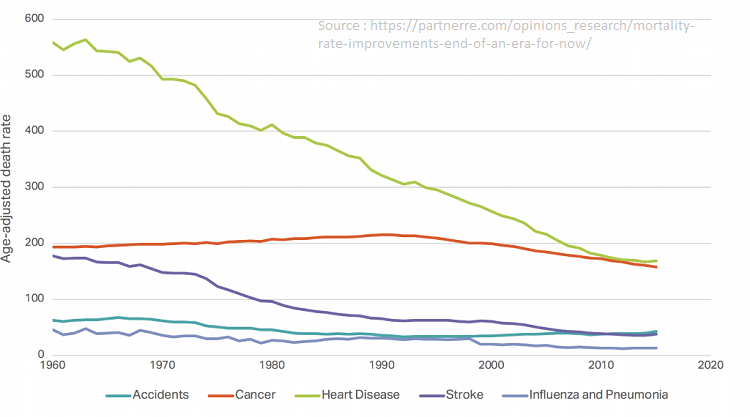 If we talk about the current Covid-19 related deaths they are mostly because we have no cure or vaccine available. But very soon, we will have some cure available which will make sure that not too many people die in future because of this virus.

If you have money with you, it will get tougher and tougher for you to die as no one will let you die easily. Neither your family members nor the hospitals that benefit out of treating you.

Another angle to the same conversation is that our country is making progress every year and we are on our journey towards becoming a developed nation. India in 2040-50 (When I will be retired) be a different place than today (like its different than 1990)

As a nation develops we have better access to everything. We have more money, we have better healthcare system, we have better roads and infrastructure (imagine less accidents and all the people who didn’t meet accident also adding to the pool of retired people).

If you compare yourself to your parents, you will agree that you have much better access to better housing, quality food (ok this is controversial), quality entertainment, quality travel, quality healthcare, quality roads and infrastructure. They might not have been able to afford a good hospital, but you can!. 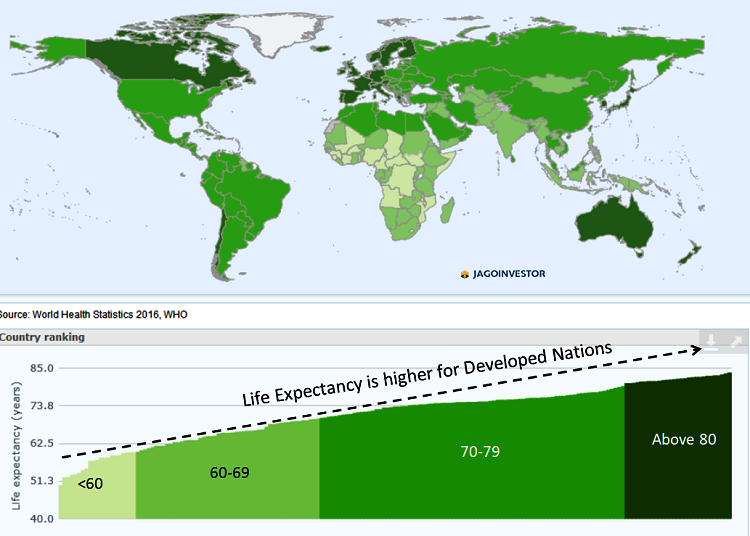 If you currently have a look at the share of aged population in developed countries, you will see that it’s very high in developed nations compared to developing or poor nations. For example, Japan has 26% of people who are senior citizen and Italy has 22.4% .. India will reach to that point in next 30-40 yrs.

In Japan, there is a village called Ogimi, where people generally live up to an age of 100 yrs. I am just showing a glimpse of what can happen with a developed country

Here is the data, I found in this report about share of senior citizens in overall population for developed countries. Check below

In India, currently the senior citizen population share is around 8-9%, which is expected to rise to 20% of population, which will be quite huge. This might be a disaster unless we all are prepared for with sufficient retirement corpus. Here is what Google tells me about the future 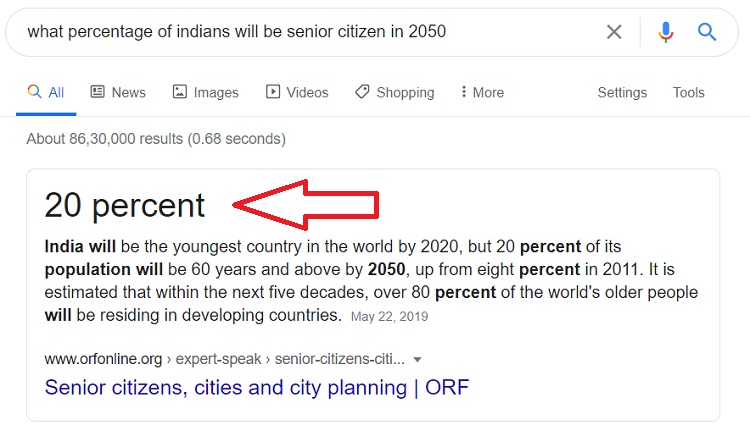 So if you are 30-40 yrs. old person reading this article, you need to be clear on this that once you get older, you will have much higher chances of living longer compared to our parents or much older generation. It’s a different thing that you live long in reality or not. But you have to plan thinking of the longest you can live, not the “average age”

So to sum it up, I will show you what are the recent United Nations, World Aging Population Report 2019 says about all the points I was trying to make above. You can see that they say the same things 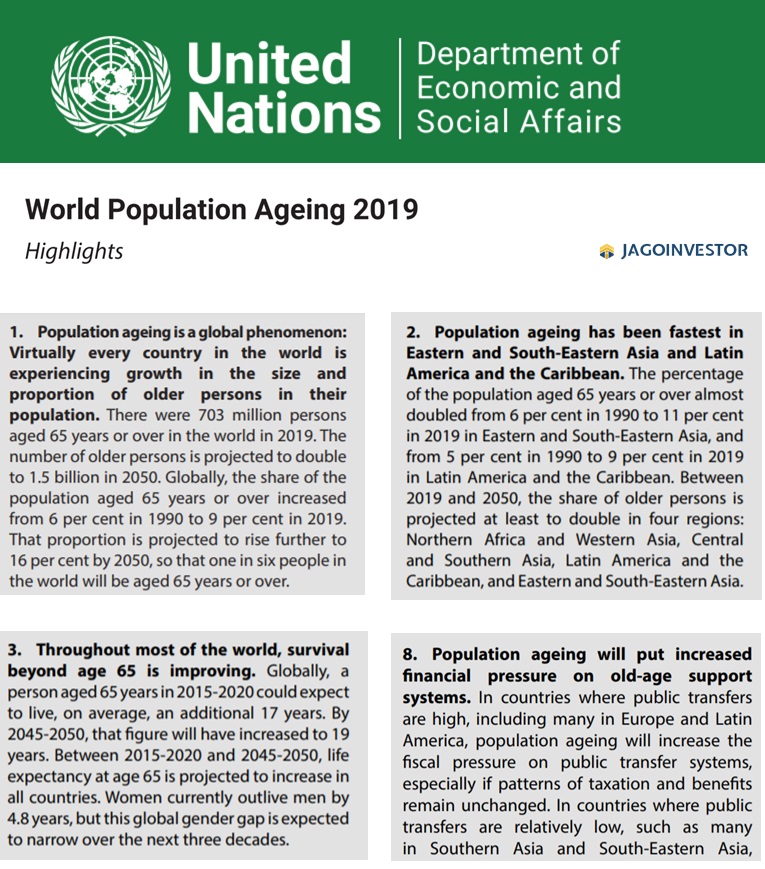 I would like to conclude and sum up this article now with some points. Here they are

Please share in comments section, what you feel about this article and whats your views about retirement phase and how long people will live in future?

18 replies on this article “How long will you live after retirement? (Its not 80 yrs)”