How mutual funds operate internally and have strong structure ?

Today, I want to help you understand how a mutual fund operates in layman language and how its structure looks like. How various entities come together to create a mutual fund.

There are a lot of investors who are new to mutual funds concept and they have just heard about the mutual funds. All they know about it is that some investors pool in their money in mutual funds, which invests in markets by a fund manager and they get very good returns. While that’s a simple explanation, I today want to inform you about the details and how things actually are structured, which makes mutual funds one of the safest instruments and highly professional, and leaves almost no chance of fraud in mutual funds 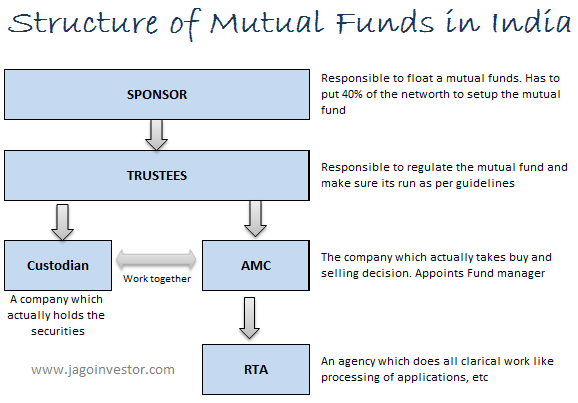 So let’s get into the entities which comprise of a mutual fund.

The first entity is the “sponsor” of a mutual fund. It’s a person or the corporate body which initiates the launch of a mutual fund. You can see this person as the promotor of the company, who is the first one to think about the company. As per SEBI, the sponsor should have a good reputation, great professional competence and they should be financially sound to become a sponsor.

They also need to have at least 5 yrs of experience in the financial services industry and should contribute 40% of the AMC net worth (we will soon see what is AMC). The sponsor is not responsible or liable for any loss or shortfall resulting from the operation of the schemes beyond the initial contribution made by it towards setting up of the mutual fund

The next thing you should know is that a mutual fund is created as a public trust and registered with SEBI. The sponsor appoints the trustees which look after the trust and they are the owners of the mutual fund property and assets.

As per the SEBI rules, At least 2/3rd of the directors of the trustees have to be independent directors who are not associated with the sponsor in any manner.

AMC means the Asset Management company which actually manages the investor’s money and takes the decision of investing the money. The AMC is appointed by Trustees. AMC does the fund management and charges a fee for their services which is borne out of the investor’s money (that’s why expense ratio is there)

The AMC has to be approved by the SEBI and the Board of Directors in AMC must have at least 50% of Directors who are independent directors. So an AMC functions under the supervision of SEBI, Trustees and the board of directors.

Some rules set by SEBI

As per rules set by SEBI, An AMC (also referred to as fund house) can’t use the same broker to buy more than 5% of the securities. Just like we use a trading account to buy and sell securities, in the same way, an AMC uses a broker to buy and sell securities in large quantities, but they can’t buy a bulk quantity with the same broker, which makes sure they can’t have any “arrangements” with one of them.

Below you can see the details of trustees, sponsor, and AMC which I took from the HDFC Mutual Fund website

AMC is responsible for floating a new mutual fund scheme, and inorder to do that, they have to follow rules prescribed by SEBI and require the signature of the trustee.

So the HDFC Top 200 fund was floated by HDFC Asset Management Company Limited (AMC), but owned by HDFC mutual fund (the trust). It is the AMC that hires all the fund managers, IFA (agents) who helps in sales, and all the employees who work at the AMC offices.

The securities which are bought and sold by the fund manager, it’s actually not in the custody of AMC, but another entity called custodian or the depository participant. It is registered with SEBI and has the access to the securities.

A custodian keeps the physical securities (like GOLD and any physical certificates) and any Demat stocks/units are stored at Depository level.

A custodian is also responsible for keeping an eye on all the corporate actions like when is a stock declaring dividend, bonus issue etc in the stocks where fund has invested. So an AMC just focuses on the decisions like buying and selling and all the task of managing, storing of actual securities happens at the custodian level

Note that an AMC can have more than one custodian for various kinds of securities, like in case of HDFC AMC, the securities are with HDFC Bank LTD (one of the custodians), but for their HDFC Gold ETF, the custodian is Deutsche Bank A.G which stores physical gold.

As per regulations, Sponsor and the Custodian must be separate entities which make the mutual funds a very safe instrument and fraud is almost impossible.

Finally, comes to a very important entity called as Registrar and Transfer agents(RTA), which are appointed by AMC

These RTA are the entities that carry out all the clerical work like processing of applications, processing KYC of investors, issuing unit certificates, sending refunds, processing redemption orders etc. So you must have heard about CAMS and Karvy, which are the RTA agencies for mutual funds. So some AMC’s give contract to CAMS and other AMC’s have given it to Karvy. The RTA charges a service fee for the work they do.

So for example, HDFC, Birla, ICICI, SBI are serviced by CAMS, whereas Reliance, UTI, Axis mutual funds have chosen Karvy as their RTA. Note that all the AMC offices also carry out the clerical tasks like if you want to change the address in your mutual funds or add a nominee, you can go to AMC office directly or their RTA 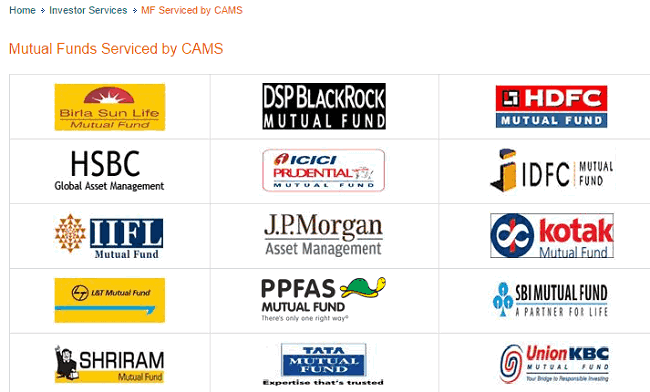 This completes the high-level structure of mutual funds. There are various other small entities that are sub-parts of these bigger entities but let’s not get into that as of now.

By looking at the above structure you can understand that a lot of care has been taken to design the mutual funds and at various points, the conflict of interest does not arise.

Are you investing in mutual funds?

Mutual Funds are wonderful products and especially for long term goals. You can now start your mutual fund’s journey with Jagoinvestor if are planning to invest in mutual funds.

75 replies on this article “How mutual funds operate internally and have strong structure ?”