Do you want to learn how money evolved in this world ? How did the concept of money took birth ? Today it might look very easy and intuitive to see and manage money, but it has long history and a very interesting one! . I always used to wonder about these topics, but got to read anything in detail untill some months back when Vivek Kaul sent me his book – “Easy Money – Evolution of Money from Robinson Crusoe to the First world war” (buy the book)

In this book, Vivek has shared how this world was first on the barter system and then slowly and steadily the concept of money was born. He mentions various events in history and examples which will how you how money was not just invented in a day, but it slowly took its shape because it was the need of the hour. 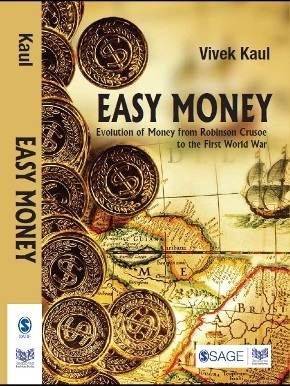 Kaul starts with the history of money from time immemorial and traces the development of money and the financial system till around the time of the end of the First World War. He tells us about the various commodities that have been used as money at various points of time. Other than gold and silver, a whole lot of other metals like copper, iron, platinum, lead, nickel, and tin, have been used as money by various civilizations at various points of time.

Here is one example sharing from the book

Gold is valueable because its “Useless”

One of the best things I learned from the book is that Gold is valuable in this world, because its Useless. Yes – you heard it right. From the start of my life, I used to wonder that why people love gold and why its so expensive when it cant be used for anything useful, and in the book I learnt that – its the exact reason why its so valuable . The book shares the reason for this and Here is an excerpt from the book

What also helped gold survive as money is its uselessness. “Despite the fact that it is highly malleable (can be beaten into sheets easily), ductile (can be easily drawn into wires), and the best conductor of electricity, gold does not have many industrial uses like other metals have. This is primarily because there is very little of it go¬ing around. Also, what does not help is the fact that gold is as soft as putty. This softness makes it practically useless for all purposes that need metal,” writes Kaul. “When commodities are used as money they are taken away from their primary use.

So, if rice or wheat is used as money for daily transactions and to preserve wealth, it means a lesser amount of rice and wheat in the market for people to buy and eat. This, in turn, would mean higher prices of grains, which are staple food in large parts of the world. Gold does not have many practical uses. So if people hoard gold, it does not hurt anyone,” he adds. Hence, gold survived as money largely till the start of the First World War. Then paper money took over as various European governments had to print money in order to finance the First World War.

One of the most interesting points of Easy Money is the part where Kaul explains the close link between the rise of paper money and the banking system as it has evolved to this day. In fact, the paper money system was at the heart of the profitability of banks. As Kaul writes “The moral of the story is that the lesser the capital the bank had, the greater money it made, but greater was its chance of going bust as well. As Walter Bagehot, the great editor of The Economist once put it, “the main source of profitableness of established banking is the smallness of requisite capital.”

Note that the book also talks about some of the heavy topics like financial crisis, financial innovations like securitization, collateralized debt obligations, and credit default swaps, how banks evolved etc

The last chapter of the book tries to link the history to way things are happening currently. This chapter could have been little longer and ends a bit too quickly. Another thing that the author could have done is have had takeaways at the end of each chapter, linking them to the current financial crisis.

My personal take on the book

While I enjoyed the book, and its an an excellent read for anyone looking to understand the current financial crisis from a historical view point in simple jargon free English. Be clear that its not a regular personal finance book teaching you about concepts. Also be ready to read few things which you might not be able to digest in a single read. You should read the book only if you love the topic of money evolution and the whole idea which the book wants to present.

Buy the Book by Clicking Here

Vivek Kaul has worked at senior positions with the Daily News and Analysis (DNA) and The Economic Times. His writings have appeared across various other publications in India. These include The Times of India, The Times of India (Crest edition), The Hindu, The Hindu Business Line, The Pioneer, Indian Management, Asian Age, Deccan Chronicle, Forbes India, and Wealth Insight. He has also written regularly for www.rediff.com. Currently, he is a regu­lar columnist for www.firstpost.com and a regular contributor to DNA.