Do you have a daughter? Saving in gold for her marriage?

Nice! .. Nothing wrong with it.

Just that I wanted to tell you what your daughter wants?!

Yes, that’s exactly what we did. We ran a survey with around 1,996 people which was a mix of men and women and tried to get a perspective of how women (and men also) see the gold which is given in our Indian marriages.

Check out this 20 min video below where I have shared the results of the survey in detail and also gave my commentary.

Indian marriages are not complete without GOLD.

Every parent tries to give enough gold to their daughters in form of jewelry which is worn by the bride in marriage and it also kind of becomes a scorecard for others to compete. But do daughters really want gold from parents to that extent?

Here is what females replied to our question when we asked them “What is the main reason why you want GOLD for your wedding?” 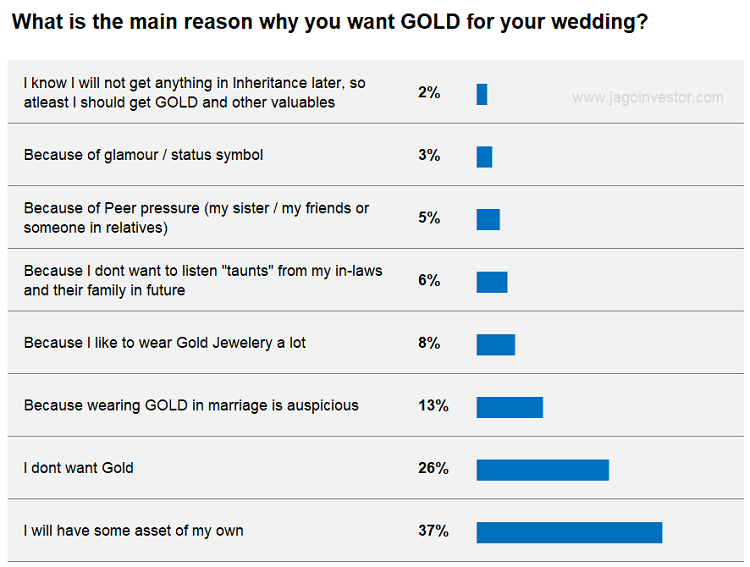 Check our more survey results in our video above..

There is enough for me to talk on this on this topic, but I would save that for another day and rather point you to this excellent article which talks about GOLD, Dowry and what women have to go through in our country

My parents, however, decided to give me — a person who does not wear any jewelry, not even a wedding ring — a pound or two of gold jewelry. A matter of pride.

“Your father is a doctor and mother is a professor; people will expect you to wear some gold,” an aunt explained.

“What you do today will reflect on your sister and will affect her wedding,” another aunt said.

Weddings are hard, and I had no fight left in me. So I went along with it. I wore an armor of gold. The numerous chains were stitched onto my sari to keep them in place. I never saw that jewelry again after the wedding. My mother-in-law has it safe in a bank locker somewhere.

One of the first conversations I had with my mother-in-law was when she told me that her son had certain responsibilities to his sister. She then asked me to not stop him from fulfilling those.

She was trying to tell me that when the time came, I should support my husband in paying his sister’s dowry.

But I don’t think I can support a system that turns women into bargaining chips.

I would really love to get your comments and opinion about this topic. Please share that in the comments section.

Disclaimer: The survey results don’t claim to showcase what the whole of India thinks. The survey was taken by only 1,996 people and its not a very big same size as such, however it’s not very small though.