Beware of Fake Email Scams asking for password & Critical information – Its a trap !

Some days back one of our readers forwarded an email to me, which he got in the name of SBI Bank and it was about some new scheme or feature launched. All he had to do was login to his account by clicking on the LINK given inside the email. He asked me over the email if this mail was genuine or fake ? You can see the snapshot of the email below. 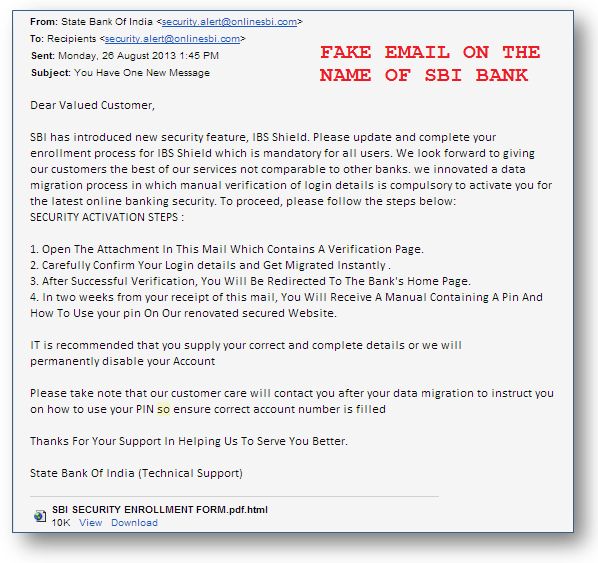 I looked at the email and instantly sensed that this was some kind of fraud email, just to get hold of the login details of the mail receiver. In this article I want to cover few points which will teach you more about these kind of fake emails and some important points, so that you are not duped in future and are alert.

3 common things you will notice in Fake Emails

There are few common traits of most of the fake fruad emails you will recieve, you should notive these 3 points in those emails.

1. The email id used looks authentic, but it’s NOT

One of the most common trick used in fake emails, is that the email id used by them looks very authentic, but if you enquire a bit about it, you will find out that they are fake and just gives an impression of being authentic. For example , if you get an email from SBI Bank and the email id is “alert@sbi-bank.com”, at first you might get fooled that the email is really form SBI bank, but if you go to google and and search for SBI Bank website, you will come to know that its sbi.co.in or onlinesbi.com, but the email has come from a different place. You should check the website of the fake email id (in this case – sbi-bank.com) and you will come to know that either it does not exist or looking at the website, you will figure out that its Fake.

I can share a real life example of this. My brother faced this fake email some months back. He was searching for a job and he got an email from Larson & Toubro company, that his resume was shortlisted and he has to attend an interview, but he had to give a security deposit of some amount (around Rs 8,000) which he will be refunded back after the interview.

The moment I heard this, I knew this is some fake email, because no company asks anything like that. I asked him to search for larson & toubro website and  it we landed on www.larsentoubro.com/‎ . However the email came from profile@larsentoubroltd.com/‎ (extra ltd word in email), when we went to that website (the fake one) it did’nt exist. When we searched on internet about it, we got so many threads about about it and how they lost money.

Given our country has so much of unemployment, and so many people are looking for jobs, its easy to dupe them and run this kind of rackets. Infact people make millions through these kind of fake emails. Below is the email which my brother got for interview, you can notice how unprofessional the email sounds. 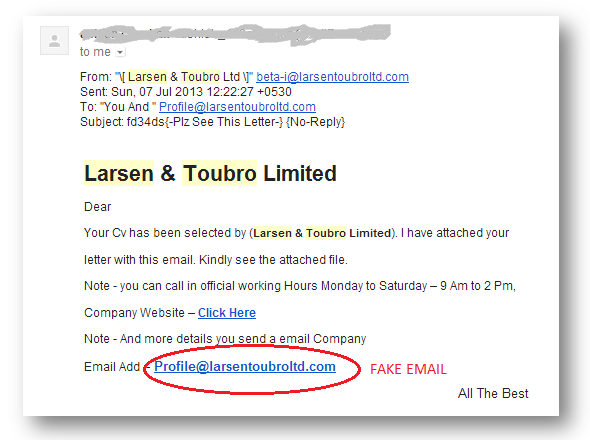 Note – Many times, you will also receive emails coming from the original sites and web-address, but even there is a trick for that, if you use 3rd party email sending software’s, you can fake your email id. You will notive in your email that the mail came “via” another server.

2. The target website link inside the email does not look authentic

A lot of times, inside the fake email you have a link to click, it takes you to some target website and you have to fill some personal details. In reality, the website is a fake one, which looks real visually, but on the backend its a fake one. This is called as PHISHING Trick, which steals your important login details and misuse later. So always make sure that you have all the important links written down or saved as bookmarks in your browsers.

3. The mail asks for PASSWORD or some critical information

If you see all the fake emails, one common thing you will notice is that these emails scare on some point and create some kind of emergency. It can be regarding some new change, new scheme, last date for something, It might say that the server was compromised and they are just asking for proof and things like those.

Always remember that banks or institutions do not ask for these kind of things over email. Passwords are never asked by anyone over email for sure. At times fake emails use name of RBI and Income Tax department so that people take it seriously because there is some kind of fear attached with it (ohh …. its email from Tax department, better I take it seriously). Checkout the Video below which explains about the RBI Email Scam !

Common Traits of the Fake Emails and the Websites

If you look at the fake emails and their websites (the link inside the email). You will notice that they have very bad grammar, no professional look and they ask for some stupid thing to be done which does not look natural. Like some of your friend in Hawaii, who is robbed and now needs $400 to come back to India and will give back your money later, such kind of emails come from hacked emails of some of your friends.

When do Fake Emails Arrive ?

These fake emails can come anytime to you, but note that the frequency of mails increases, when some important event is nearby like income tax season, or income tax filing season or when some major law has changed, so that people can relate to fake emails.

What’s your thought on this matter and have you ever got an email asking you to click on a link and provide some critical information? And what did you do in that case ? Can you share ?

39 replies on this article “Beware of Fake Email Scams asking for password & Critical information – Its a trap !”