Some major changes are going to happen in life insurance industry from Jan 1, 2014, especially in traditional policies like Endowment Plans, money-back plans and even ULIP’s. You will surely have a LIC policy or any other private sector traditional plans or might buy them in coming times. Here are 5 major changes which you should be aware about and they will come  into effect from Jan 1, 2014.

Till now LIC was not charging the service tax of 3% from the customers and paying it to govt from the pool of money collected itself, but now the service tax will have to be charged separately from policy holders. Which means that if your LIC premium was Rs 50,000 per annum, now it will be 3.09% higher in first year, which is Rs 51,500  and after 1st year, it will be 1.545% as per moneylife article.

While customers see it as additional burden, note that its not the case exactly, Earlier – LIC was paying the service tax from the pool of money collected from investors only, which reduced the bonus amount given back to them. But now because it will not be taken out from the funds, that means the bonus declared each year will go up by that much margin and will come back to investors only. Note that Pvt companies were charging the service tax already, so nothing changes on their side. Only LIC was not charging it separately, which they will have to do from Jan 1, 2014 deadline.

Another good change is that, from 4th-7th year, the minimum surrender value would be 50% of the premiums paid, and has to reach 90% of premiums paid in last 2 yrs of policy paying tenure.

There is a great possibility that the premiums on LIC policies will come down by some margin, because the mortality rates will now be revised by LIC in calculating the premiums.

Mortality rates are the rates at which the insurance company deducts the fees for insuring you based on your age. LIC had been using old mortality rates till now, but now they will have to use new mortality rates . Just to give you an idea on reduction of premium, when I check the mortality rate for a 40 yrs old person in old table, its 0.001803 . But in new rates its 0.002053 . Which is approx 10% better. Lets not go into detailed calculation at the moment, but your risk premium part should go down by 10% (not the full premium, because only some part of whole premium in traditional policies are risk premium and rest is investment part) .

If the policy holder is above 45 yrs of age, then the Sum Assured has to be more than 10 times the annual premium, and for those who are less than 45 yrs old, it can be minimum 7 times the premiums. Note that for claiming the tax exemptions, your sum assured has to be 10 times the base yearly premium. So when you buy the policy in-case, you need to keep it in mind. BasuNivesh has done a great point by point notes on each aspect of regulation, in-case you want to go into details.

5. Agents’ incentives have now been linked to the premium paying term

In case of regular premium insurance policies, a policy with a premium paying term (PPT) of five years will not pay more than 15% in the first year. Products with PPT of 12 years or more will have first year commissions up to 35% in case the company has completed 10 years of existence and 40% for the company in business for less than 10 years.

The funny aspect is that a lot of LIC agents tried to mislead many new investors by projecting date Jan 1, as the deadline when a lot of LIC products will stop giving good features using the official notification. LiveMint has even captured it in this image. 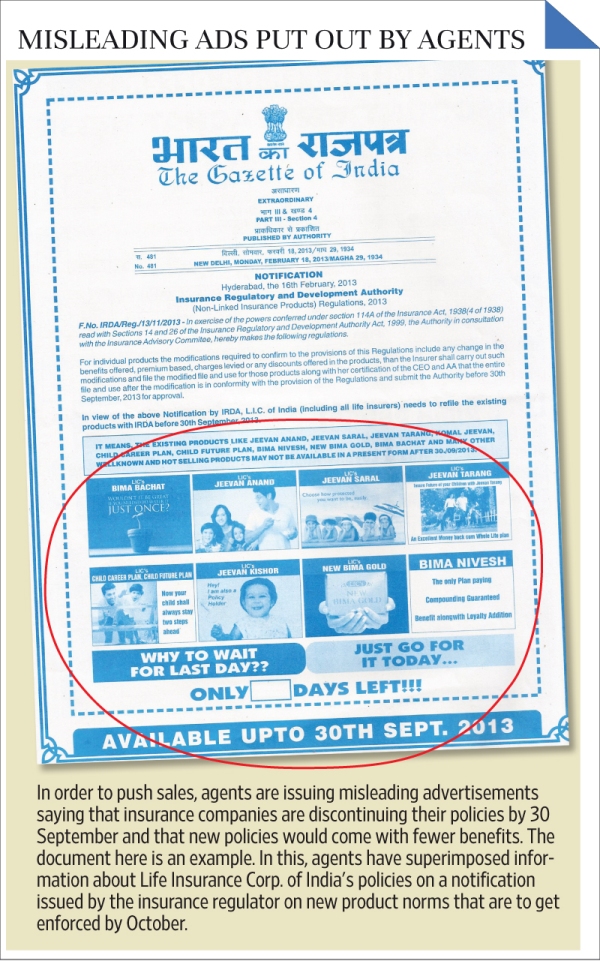 What should you do ?

The insurers have to refile all their products to IRDA and already lots of products have been approved and many are still waiting for approvals. So if you have a insurance policy, then you will get the communication from your insurer about any changes if any. Right now, for sure the traditional plans have got better, compared to their past avatars.

If you are adamant on buying endowment plan, better wait for some time and let things get more clear. Let me know about your thoughts on this change ?