Today I want to show you some patterns of gold prices from last few decades. There is no interpretation or conclusion but some findings and observations on gold price fluctuations in India. From last 10 yrs gold has been on a bull run and prices have multiplied many folds. In the last couple of weeks, gold prices have been extremely volatile and some analysts also predict that gold price upside movement is in threat. So I found gold prices for last 86 yrs (1925 – 2011) and did some number crunching and some graphs from which we get some interesting findings. 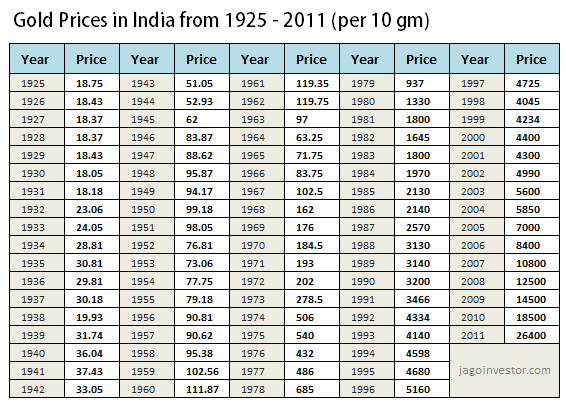 The next chart is the CAGR return chart for 4 yrs time frame and the graph is for running periods… that means 1925-1928, 1926-1929… 2008-2011. CAGR return is the main indicator of the performance of any instrument. If you look at the chart below you can see the ups and downs in gold performance and you can see how gold has performed in short run (4 yrs period) for a long time line. You can see that gold returns touched 20%-25% in 70’s and even in recent time it has performed wonderfully… which we all are aware of :).

Then you can see the graph below which shows CAGR return on 8 yr running period. The interesting a little obvious fact is that it hardly gave any negative return in any 8 yrs time frame, only during 50’s and late 90’s it has performed badly.

This graph is same as above just that the base year taken was 1960 so considering gold was bought in 1960, the graph shows the CAGR return for different holding periods. You can see that apart from those who sold the gold in 80’s realised the best CAGR return, but those who held it for long, still have the returns in range of below 10%.

What are your conclusions based on these charts ? What do you think about gold price movement from this point onwards ?