A close look at Real Estate Returns in India

Real estate is one of the largest employer after agriculture in India. It is also a globally recognized sector which is witnessing a high growth in recent times because of increasing demands of offices and residential places.

One of my friend has shared his own experience about real estate, let me share it with you. 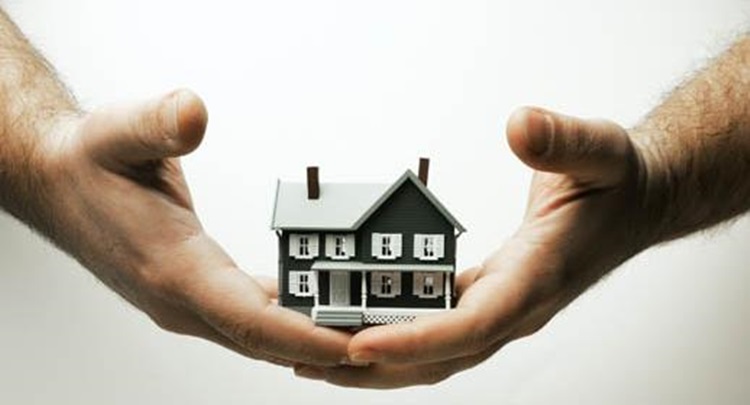 One of my friends experience about real estate:

“The current market value of my flat in Mumbai is close to 1 crore, I bought it at 28 lacs in year 2000. The returns have been Mind boggling 72 lacs in 9 years, i.e. 8 lacs a year approx. , more than my current salary and now I am planning to invest more in real estate instead of Equity, What do you think”.

A not so close friend was discussing his Real Estate portfolio with me.

He belongs to first category of common sense deprived idiots, who do not understand mathematics well. 28 lacs flat became 1 crore in Value in 9 yrs, the returns are great, but not exceptional enough to make someone eyes pop out.

Now what’s so great return about this 15.2% Return?

15.2% return over long term is desirable and great and what’s normal return from Real estate in last decade in our Country, The only thing irritating is how people make fuss about it.

Even Gold has outperformed, Gold was $300 per ounce in 2001 and now it’s close to $1100 ounce, that’s 15.5% return, 0.3% more. On the top of that Builders are not keeping their promises of Delivering Projects on Time and with same quality Promised.

Real estate investments have caught everyone’s attention in the past decade and every Tom, Dick and Harry with 5 lacs salary tries to grab a 40 lacs flat. I will try to throw some light on Average Real estate returns in past 8-9 yrs in India.

Coming back to my Friend:

I told him that it’s been a very good return, and I appreciate his timing, good job. But definitely he is bragging more than it deserves. A second person (his friend) suddenly comes to his rescue and challenges me.

“But Manish, I bought a flat in 2003 @20 Lacs with 3 lacs of down payment and rest a home loan. I spent total of 7 lacs till date and the flat is already quoting around 60 lacs, that 40 lacs of profit in just 3 yrs through investment of 7 lacs, that’s 78% return on annual basis”, showing off his fast calculations skills and giving me a “anything-else-you-young-financial-planner” looks his face .

These people are from another category of “common sense deprived and mathematically challenged” people. It is worse than first category. The problem with these people is that they do not understand “leveraging” .

What is mean by Leverage?

A situation of sitting on huge profits by just investing a small amount as down-payment and rest with home loan is pure example of leverage and very common in India, This gives a feel to people that they are very smart.

These people never consider the case when their house value drops by a big margin like say 15 lacs and they have just invested 5 lacs from their pocket, then they are in loss of -300% (absolute). But as you know, investors like to consider a rosy picture; they somehow believe that it can’t be the case with them.

When Real Estate broke in US:

As US citizens who bought Real estate in the middle of the Bubble just because credit was cheap and they could have made a lot of money by taking a Home loan and almost nil Down payment, When Real Estate broke in US, people who has put $10,000 from their pockets for a $4 million house were in losses of $1 million, because they had to pay $4 million as a loan money for something which is now costing $3 million.

That’s an unrealized loss of $1 million in a short time. That’s the problem of Leverage. Investors never think about this, India is a success story and housing is scarce, that’s enough for them to take a chance.

With my amazing quality of self-control, I kept all this in my mind and didn’t argue with him, sometimes your skills of explanation is limited to blogs only.

Don’t feel amazed if I tell you that there is an Index for tracking Real Estate in India. Its called Residex and maintained by National Housing Bank in India. It’s updated once every 6 months.

It covers all the major cities and the sub-areas in that city. The index Value over time will tell you how real estate prices are doing in some area or city.

Please understand that these prices are average real estate prices and not some general case which would negate what we discuss here today.

I don’t know how that is calculated but a common sense way of calculating it is to take a sample of real estate plots/flats in an area (for example 1000 units) and calculating the appreciation in value from last 6 months .

Here is the chart of the same table 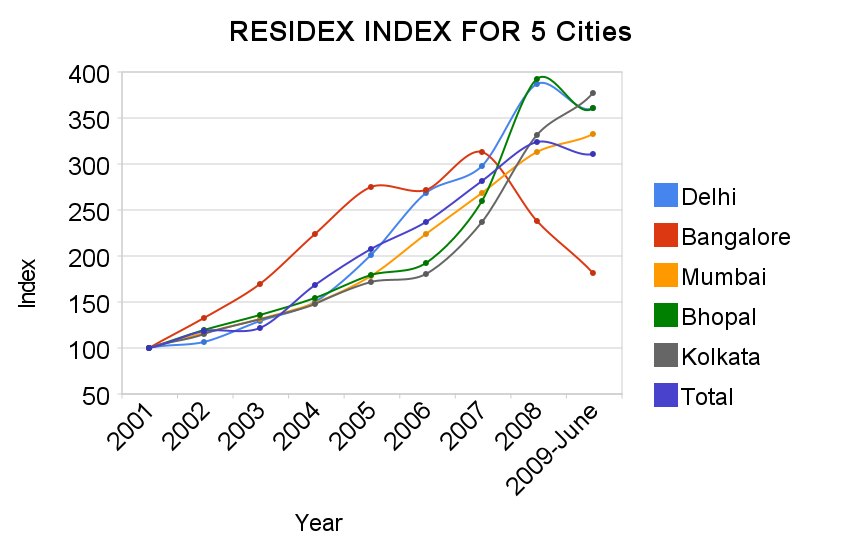 What is the mistake people do when they calculate Returns?

The beautiful mistake which everyone does is that they calculate pure absolute returns from Real estate which is in many lacs of rupees obviously.

That’s a lot of money and people are excited to see that much money, but you also have to see that they invested damn 30 lacs !! for that, which is not every one’s cup of tea and the returns are normal 14-15% return/year on investment if you compare it with Gold or Equity.

You could have made more returns if you had invested in Equity (SIP in mutual funds in some top funds) . If you consider the risk taken for the return people have got in Real estate , personally I am not very much excited then, Investors forget the risk taken to get some return and only concentrate on Return part.

See an Article on GFactor , A tool to find out if an investment suits you.

What you have to see is how much return you got from something after adjusting the risk taken for that . So given a time frame of 1 year .

Some smart (second category people) people think that they can buy Real Estate on loan and make 30-40 lacs in 4-5 yrs from house value appreciation, While that is possible and has happened to a lot of them and definitely the return would be amazing.

But this exposes them to a great amount of risk which they don’t understand, its pure leveraging. There are better ways of leveraging than this. This kind of Leveraging is still nothing in front of Options trading in Nifty or some Stocks.

Not that I discourage people from taking a home loan and invest in real estate , but don’t overdo it , and understand and accept the risk involved, be ready for it.

“Risk happens when you have no idea what you are doing”. If you pre-calculate it and consider it, then it’s called Speculation, which is my favorite 🙂 .

An option trading is something I would recommend who have great risk appetite and dream of millions in short span of time, better than real estate.

Make sure you get updated for all the future posts , Subscribe FREE through Email now

What is Average Real Estate Returns in India

IF we see the above chart of RESIDEX Values (for 8.5 years), you can find out the CAGR return of Real Estate in different cities. Let me show that for 5 cities in India. 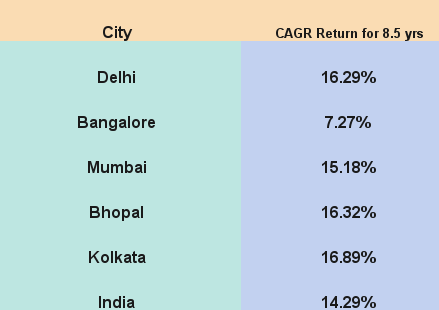 Chart f or the same data 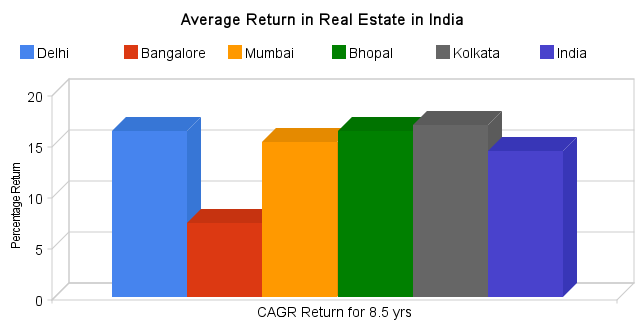 What Should you Do ?

First of all, understand that Real Estate is important and you should always invest in it for Diversification of your Portfolio (If you can afford it right now). But that does not mean compromising with your Risk Appetite and investing just for the sake of Investing.

If you want to buy home, make sure you afford it, Buy a 1 BHK which you can afford if you want to live in it. If you want more than 1 BHK, plan for it, take it later. There is no rush. Real Estate is not the last thing in the world.

Don’t feel left out when you see others minting money in Real Estate, believe me they are making similar returns which you can make from Equity, just that the magnitude of profits they are making is high, not the returns on average. So Chill !! .

Note: Understand that whatever we have talked here is based on the RESIDEX index and there will be many specific cases which would make this all talk a nonsense, but we have to look at general case and not a specific case.

I combined the data from NHB from 2001-2007 and combined it with data on their Website to construct all 8.5 yrs of data. There was a shift in Base year because of which I had to do so.

What do you think about the Real Estate Prices at the moment in India?

I do not feel they are justified and the prices are mainly driven because of unnatural demand created by easy access to Loan. People buy it, but cannot afford it, If things continue for some more years. I would be surprised to see a big bubble burst in India like we saw in 2007.

Leave your Comments and let me know you are reading this blog.

Disclaimer: I have not invested in Real Estate, I am not very much excited about it and I don’t have money for it.