Mohit, one of our readers has agreed to share his rags to riches story which will help a lot of you to build the mindset to become rich and do what it takes. Over to Mohit.

My story is going to be about two generations and how each view, treats and values money differently. Some background first…

Imagine sitting under a lamp-post or under the stair-case of your palatial home (shared) for your studies, way back in the 1970s? Sounds like a scene from a Bollywood potboiler? Well, this was exactly how my father scrapped through his school and college education. 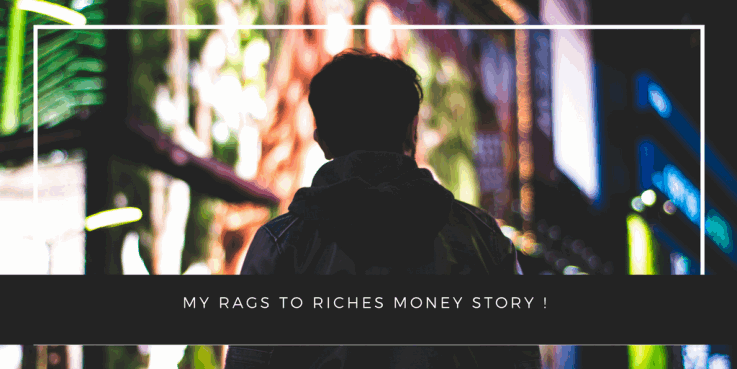 He was born to a joint-family that had a huge house but no income. A vain father, no mother and zero income; my father’s money story is a true rags-to-riches one in the sense that he had absolutely no support and progressed on scholarships by his college to complete his degree.

Also in true Hindi-film style; the love of his life (then) rejected him for lack of money.

How my father got his first job

In the 1970s, a generation waking up to the post-independence yet pre-liberalized era of working; he got his first job in the then Hindustan Computers (HCL) under its founder, Shiv Nadar. He still remembers fondly that his employee code was 0002, i.e, he was HCL’s second recruit.

My father faced such money hardships in his childhood that the only objective in his life was to acquire wealth. But there were no equity markets or organized financial planning back then. One invested in real-estate of whatever surplus they had, and he was no different.

My father started his own business

After a brief stint with HCL, my father decided to venture out on his own and set up a small logistics company (for the uninitiated, logistics is responsible for import of goods in India from a foreign-country and vice-versa), and again as my father fondly recalls now, the first month’s profit he made in 1980 was fifty thousand rupees!

That was more than what he earned in his five years in his job! Therefore he immediately recognized that business is the way to be if one wants to make more money.

From the early-1980s to the early 2000s, i.e. in a span of 20years, he made the tables turn in his favor and even though he did not make an Ambani out of himself; he acquired a 9-digit net-worth starting from absolute scratch. As much as I am proud of his achievement, I objectively analyze his money journey and mistakes in following bullet points –

My analysis on my father’s money journey – “Achievements and Mistakes”

Having seen his business success story (which as a child, I often took lightly. I didn’t quite acknowledge that making money is this difficult), I had a few things clear to me –

Just like my father, I knew business was the way to be and set-up my venture in December 2004 (although I had a kickstart – firstly space was provided by him, secondly I didn’t have to be the breadwinner).

Again the first few months were so profitable that my self-belief was sky-high. In fact, I became over-confident, or maybe a better word would be snotty. Yes, today I can admit it; even though back then I didn’t realize it. So I set-up another business. And then another.

I wanted to become super-rich and in super quick time that I started losing sight of value-addition by my business. I learned 2 important lessons.

A couple of years later, my businesses started going downhill. I had to shut down a couple of them and like my father before me, I focused on the A-game. Thankfully a new trade-lane emerged in India and my business and money-journey started improving brightly.

As it became more consistent, I again ventured out in a couple of new fields. Whatever surplus I had, I either put in my businesses OR in bank FDs. Looking back, I am shameful to admit but I didn’t utilize India’s maturing equity markets especially between 2008-2010 period.

In late-2013, I had my first brush with mutual funds. Through a banker (I still credit him for bringing me to equity), I made my first SIP and my first lump sum mutual fund investment. Because the markets grew rapidly since Modiji came to power, my investments swelled handsomely.

And that’s when I made another mistake – I shifted all my FD money into equity. My 7-digit portfolio was 100% equity, full of mutual funds, NFOs, direct stocks, you name it!

Thankfully, better sense has prevailed since then and I have deliberately re-designed my portfolio with a 50:50 equity: debt allocation in late 2017.

As things stand today, I am doing two businesses and while the first one is doing great, second is still in nascent stages. My money is invested in these two, with no investments in real estate or FDs. A third stream is markets (as shared above, 50% equity and 50% debt) with running SIPs.

As of March 2018, I am proud to share that my own net-worth (not counting father) is nine-digit itself and the aim is to attain 10-digits by 40 (I am 34 now). That’s when I shall hang-up my boots and stop working for money.

Am I happier today because of my high net worth?

Personal happiness is a state of mind. When one is feeling rich (not only money-wise but overall), then one is bound to feel happy too. In that sense, I do attribute a lot of my happiness to my growing net worth.

I have never been too much into ‘brands’ or ‘consumption’ per se, yet it is mentally comforting and moral-booster to see your net worth grow. So yes, I will agree that happiness levels have increased definitely with growing money in the bank.

However, there is a very thin line to be identified here. One tends to cross that line unknowingly (as I did at the little success at the beginning of my career). If one gets obsessed with their money-success, then it captures your mind.

You start expecting more out of yourself every day, and in the process – keep pressurizing yourself. So the trick is to find the “right balance” and acknowledge that you are separate from your “material success”. Appreciate the money success, yet keep reminding yourself that it can all go wrong tomorrow – so don’t bet your life on it.

Rich have their own set of problems

A lot of people tend to feel that their problems will vanish once they get rich. This is largely true as well, however, once you settle into “the rich” life, a different set of pressures and problems will take over. Your lack of resources for foreign travel or a Volkswagen car; will be taken over by problems of beating your neighbor’s car or foreign travel with a business-class flight etc.

My point is – money problems will disappear temporarily but new ones will soon take their place. To counter it – always try and live a lifestyle one-level below the one you could afford. If say (in the Indian context) there could be five levels of income, and you are on the fourth level, then try to deliberately follow a lifestyle you deem fit for third-level income.

Those ways, your ‘money problems’ shall always be 1-step behind you.

10X money definitely can bring 10 times comfort or even 10-times security; but definitely not 10 times happiness. Unless again, your life is one-dimensional (i.e. only about money) which is definitely not the case with anyone.

Some money lessons out of my own experiences

Let me know what did you learn from this money story?

What is your money story?

I hope everyone has learned a lot from his story.

If you want to write your money story, Leave your details here and Jagoinvestor team will get in touch with you with the next actions.